Kendall Jenner has addressed the Pepsi advert in which she starred and which came under fire for drawing on the protests of the Black Lives Matter movement.

After backlash, Pepsi withdrew the “Live For Now Moments Anthem" advert, and apologised for the commercial which aired in April and showed Jenner attending a protest and handing a can of Pepsi to one of the policemen controlling the march.

Five months later, in the trailer for the new series of Keeping Up With The Kardashians, the reality-star-turned-model, is shown discussing the matter with sister Kim Kardashian West. “It feels like my life is over,” she told her older sibling. "You made a mistake," Kardashian West replied.

While Jenner has kept silent, the mother-of-two addressed the advert earlier this summer in an interview with The Hollywood Reporter. "We're not perfect, but you see these things in the media, like Kendall and her Pepsi ad, where I see her at home crying,” West said. "In the media she looks another way because she's not addressing it." 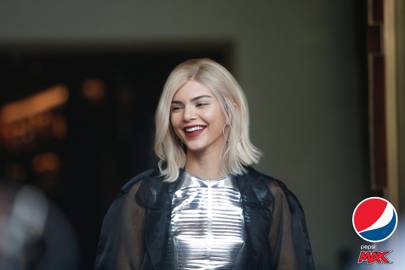 West revealed that she had encouraged Jenner to stand up for herself: "I'm just like, 'This is wrong. You need to speak up'. She was like, 'I don't ever want to show that footage of me crying.' She was trying to not make excuses or be dramatic, but that was what she was going through at the time."

Fellow model Ashley Graham also weighed in on the matter on US talkWatch What Happens Live With Andy Cohen back in June. “I think my team probably would have nipped it in the bud before anything happened,” Graham said. “I was very surprised that nobody said, ‘Hey, this looks like a bad idea right here.”

Since the controversial advert aired, Jenner has also pulled a line of T-shirts created in collaboration with her sister, Kylie Jenner, which featured their faces superimposed over images of famed music artists including The Doors and late great rappers Tupac Shakur and Notorious B.I.G. The $125 tees came under fire from from relatives of the artists, with the sisters receiving cease-and-desist letters over unauthorised use of the images.
Posted by FASHIONmode News at 6:36 PM