Azzedine Alaia has created menswear for the first time, designing the costumes for a production of The Marriage Of Figaro opera in Los Angeles. The project is part of an ongoing partnership between architects, fashion designers and operatic productions.

"I've never done men's clothes before and opera costumes are difficult," Alaia told Suzy Menkes. It's not his first foray into costume; the designer has previously created outfits for a French ballet, (A Thousand and One Nights by Angelin Preljocaj in Aix-en-Provence). "Ballet costumes are easier that opera because they are designed for movement," he explained. 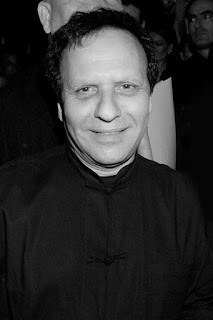 The colourful set for the performance of Figaro was designed by Jean Nouvel - the artist that Alaia credited as the reason for his involvement in such an unusual project, situated half way across the world from his Paris base.

"Azzedine and I have been friends for many years and I see him as an architectural designer, with the structure, the geometry and the texture," said Nouvel.

Last year, architect Mr Gehry and the Rodarte sisters collaborated on a production of Don Giovanni. For 2014, Zaha Hadid will create the set and Hussein Chalayan the costumes for a reimagining of Cosi Fan Tutte.

Posted by FASHIONmode News at 11:24 AM