The British Fashion Council Calls For People's Vote On Brexit

The British Fashion Council has supported the call for a People’s Vote, after MPs rejected Theresa May’s latest Brexit deal – voting against it by 432 to 202 – in a historic parliamentary defeat.

“As the British Fashion Council, we cannot emphasise strongly enough that a no-deal Brexit is a scenario that should be avoided at all costs,” the BFC said in an official statement on January 16. “The ongoing uncertainty and confusion that a no deal creates will have a negative impact on our industry, where investment is already impacted from the uncertainty being faced. A no-deal situation will result in no transition period, and with an industry that is predominantly small-medium enterprises, we would struggle to cope with the trade realities that it would bring.”

The prime minister now faces a vote of no confidence in her government leaving the Brexit strategy all the blurrier. In light of this and the fashion industry’s preference to remain (a 2016 BFC survey of the industry saw 90 per cent of respondents state a preference to remain), the BFC has pledged its support for a second referendum.

“A no-deal Brexit would have unthinkable repercussions for fashion entrepreneurs,” fashion critic Sarah Mower told Vogue following May's defeat. “Most of the British fashion talent we have are small, medium and emerging companies. Just the idea of having to deal with the massive complications of extra form-filling, delays in shipping, the stopping of the easy flow of goods and people in and out of Paris, as well as other European locations such as Italy, Portugal and Romania, where fabric is bought and clothes are manufactured, is enough to threaten the closing down of an entire sector of the UK’s £32 billion fashion industry. We are facing a national emergency; the politicians have failed to show they have concern to protect jobs in fashion or any other UK industry. A people’s vote needs to be called.” 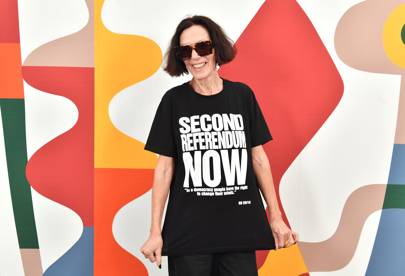 Paul Smith, who said he remained without question loyal to Europe, agreed: “It's impossible to anticipate what effect the exit will have on the purchasing of goods and services or on customer confidence, but being an independent company, we're flexible enough to weather the storm.”

The BFC has worked with the Home Office to expand and promote Tier 1 visas to international fashion creatives since the 2016 EU referendum to aid those whose futures look less stable. “Our continued conversations with the industry have shown that the key challenges remain movement of people, tariff-free access to the EU and frictionless borders,” BFC chief executive Caroline Rush told Vogue. “We will continue to gather information for the industry to support them through the changes, as well as work with and educate government on specific challenges for fashion and consider all the options put forward.”

Rush added that the BFC is also setting up a BFC Brexit Technical Working Group to analyse how the UK leaving the EU may impact the UK’s fashion sector, in order to quickly assess the range of exit scenarios. Members will include representatives across all areas of the fashion industry.

Posted by FASHIONmode News at 4:04 PM