The autumn/winter 2019 Louis Vuitton men’s collection, which debuted at the Jardin des Tuileries in Paris on Thursday, was a full-out tribute to the late Michael Jackson. Men’s artistic director Virgil Abloh sent out individual white gloves in lieu of proper paper invitations, and the garments themselves wove some of Jackson’s style signatures — like those iconic gloves and sequined military jackets — into the lexicon of Abloh’s designs.

It would have been easy to imagine Abloh using Jackson’s music to contextualise the pieces, but that would have been too easy. Ever the music-obsessive – Abloh is a DJ and producer himself and consistently brings musicians onto the runway for his shows—he instead commissioned Dev Hynes, aka Blood Orange, to create an original composition for the runway. Orchestrated by Louis Vuitton music director Benji B, and with the help of singer-songwriter Ian Isiah, Hynes brought his distinctly soulful touch to Abloh’s proceedings. 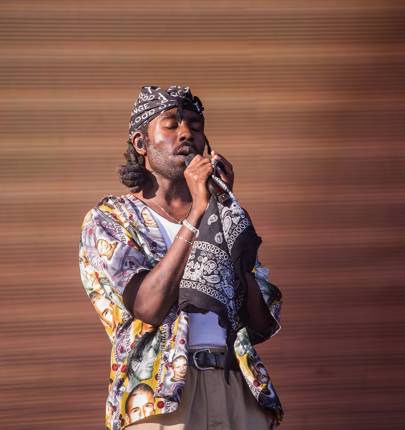 This isn’t the first time the two have worked together, nor is it Hynes’s first time scoring a fashion show. Hynes walked at Abloh’s Louis Vuitton debut last year, and the singer-songwriter has contributed his distinct musical stylings to a number of runways, including those of Eckhaus Latta and Maryam Nassir Zadeh. Most recently, he collaborated with menswear designer Grace Wales Bonner on a short film inspired by her autumn/winter 2017 collection. Listen to Hynes’s Louis Vuitton score below – with yet another notch in his belt, Hynes is fast becoming the fashion world’s most in-demand composer.