Kaia Gerber: breakout model of the spring/summer 2018 season and now fully-fledged designer. The 16-year-old daughter of Cindy Crawford has been plucked by Karl Lagerfeld to create a capsule collection for his eponymous line.

“When Karl first told us his idea to collaborate with Kaia, we were all excited by the incredible potential and power of bringing their two worlds together,” Pier Paolo Righi, chief executive officer of Karl Lagerfeld, told WWD.

“We have been working intensely over the last months with Kaia in LA and at our studio in Paris. It was exciting to see her clear vision, passion and engagement, and the collection will definitely inspire many young women,” he added. 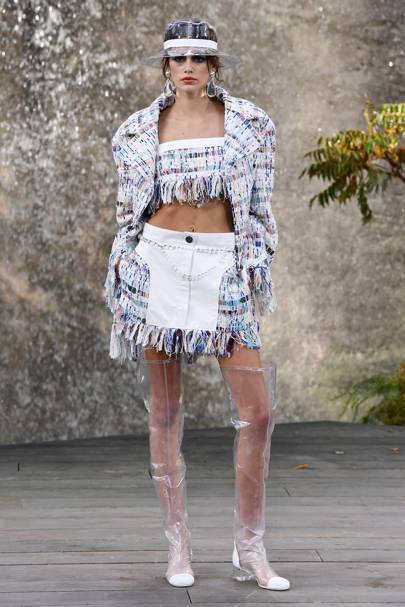 The relationship between the German creative director and rising catwalk star is not a new one. Lagerfeld called upon Gerber to open the Chanel spring/summer 2018 show in October, after watching her storm the runways at Calvin Klein, Saint Laurent, Prada and tens of other brands around the global fashion weeks.

The collection, which is set to be launched with a series of events in Los Angeles, New York and Paris in September before hitting Karl Lagerfeld stores and Karl.com, is hot on the heels of Tommy Hilfiger’s collaboration with Gigi Hadid. The debut Tommy x Gigi line generated 900 percent increased traffic to Tommy.com in the 48 hours following the see-now-buy-now show in September 2016. The American duo are preparing for their fourth season together in February, which will be shown in Milan.

Posted by FASHIONmode News at 10:06 AM