When Alessandro Michele decided to do up the Gucci Museo next to Palazzo Vecchio in Florence, it had to have the world’s best gift shop. “I wanted to buy something walking through it just now, because I worked on all these things on my iPad and now they’ve come alive,” the Gucci designer admitted on Tuesday afternoon after he’d declared the building open for business.

A jewel in the crown of the Florentine fashion house, the museum has served as a shrine to its history from Guccio Gucci’s beginnings in 1921 to Tom Ford’s tenure and onwards. But on Michele’s watch, Gucci – and the industry in which he continues to make waves – is embracing all corners of fashion history. Orchestrated by curator and critic Maria Luisa Frisa, the gallery’s three floors now encompass pieces by Trouble Andrew and Dapper Dan, embracing the guerrilla interpretations of Gucci that were always part of its story.

But it’s the so-called Gucci Garden store on the ground floor where Michele’s talent for retail innovation comes alive. “Now is the time for fashion to open the doors to something different than dresses, otherwise the market will collapse,” he said, reflecting on the store, which will sell exclusive Gucci items from ceramics to chairs and all the trinkets a gift store calls for. “It’s clear now that the world is not interested in things, which have no soul or meaning. When you go onto social media, you can see how people criticise everything: they don’t want to eat something just because you cooked it. They don’t care. They can live without you,” Michele pointed out. “With this store I was thinking about somewhere I would love to go, and somewhere to have fun. It’s more accessible than our other stores.”

Florence and its high concentration of antique stores and museums have a special place in Michele’s heart. During his time at Fendi in the 1990s he used to live in the city, discovering its secrets and letting its soul into the maximalist aesthetic he would eventually use to create his "Renaissance streetwear" vision for Gucci. “Florence is full of little treasures everywhere. Now it’s harder, but it used be like walking through a museum. Every store was full of little treasures for nothing. I learned a lot from the dealers here. They have huge expertise in every category of art. During the grand tours the English used to love coming here and buy stupid things just to have some Italian treasure,” Michele said, referring to the educational trips of the 19th century when even Queen Victoria travelled to Florence. 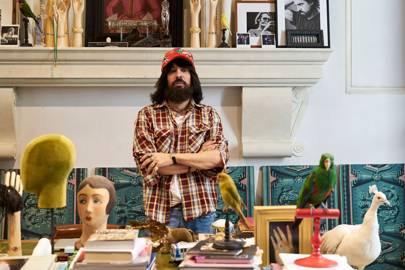 “So it’s a good place to make this kind of experiment,” he said of his new Gucci store. “It’s not serious! I mean, this is not Colette. It’s completely different. It’s like when you when to Florence in the past and you went back to London with a piece of paper. It’s not pretentious, it’s just to have fun.” Be as it may, Michele has fuelled a new age of retail in fashion where customers now queue up outside Gucci stores around the world just to get a glimpse of the museum-like shopping experience he’s created. “I have a friend, who always has to call a friend in the office in order to get in!” Michele said, laughing. “I’m thinking, oh my god, because it was honestly not a part of my project in the beginning to become the king of selling. I was more focused on being a good boy, who could hypnotise you in some way.”

Now, Michele describes the Gucci experience as “an ocean rather than a pool”: a bottomless, borderless universe for his customers to explore. “It’s crazy,” he said, reflecting on his retail success, “but I think it’s quite understandable because I’m trying to make fashion accessible, not only whether or not you have money, but in a sense close to rock ‘n’ roll. When I was young I could be on stage with some rock star for just ten lire, without buying anything. It was so powerful, the idea of six minutes of music. With one element you became a piece of this tribe.” The Gucci Garden in Florence allows customers to buy into the brand through objects such as cushions or boxes, which are relatively inexpensive compared to Michele’s ready-to-wear and jewellery.

Fortunately, his new title as king of shops hasn’t put the designer off shopping for himself, even if he now spends less time rummaging through the antique stores of Florence and more time on eBay. “You know, I’m not very technological but in the past years I’ve discovered the antique markets on the web,” he said. “I’m like a kid with a toy. But I love to find and touch things in stores. I think the little villages in Italy outside the big cities are the most incredible places. I spend a lot of time in libraries and antique bookshops. It’s like being Harry Potter. You can discover the most magical things.”

Posted by FASHIONmode News at 11:33 AM