H&M asked me, what do you think you might do," begins Erdem Moralioglu, recalling the call he received from the high-street giant. "I invited them to my studio and screened an old Pet Shop Boys video that Bruce Weber had directed in the Nineties, called 'Being Boring'. It was about all these young people invading a country house in dishevelled tuxedos, except the boys were wearing T-shirts and the girls were running around in trainers and bias-cut gowns. I loved the idea of this kind of informality and formality meeting."

Both riotous and refined, the Erdem x H&M collection is all jacquard and frill. Feminine dresses are decorated with his signature wildflower blooms, while coat-hangers heave with "the heaviest silks I could find". Victoriana white blouses hide discreet black ribbons at the nape of the neck. There are sequin slip dresses with ribbon bra straps, black lace Wednesday Addams dresses and sleeveless snowdrop-sprig ballgowns — and an accompanying campaign directed by Baz Luhrmann. The 17th fashion designer to collaborate with H&M (Ann-Sofie Johansson, the brand's creative advisor, calls him "a poetic addition" to a line-up that already boasts Balmain, Stella McCartney, Karl Lagerfeld and Kenzo), Moralioglu speaks in a stream of visual vignettes while flipping through a plump scrapbook. 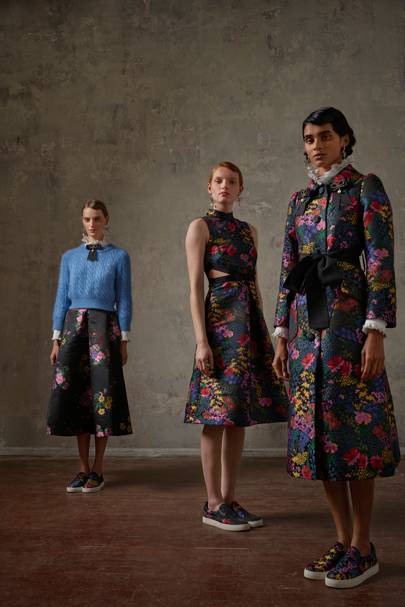 "So much of the collection was actually quite personal and I found myself reflecting on how we dressed throughout high school," he says. A cropped cable-knit mohair jumper comes in sky blue or berry, and is emphatically "Lara Flynn Boyle chain-smoking and drinking Coca-Cola in Twin Peaks". A slouchier jumper in cherryade with Fair Isle print recalls "those big Norwegian jumpers my sister used to wear with a tea dress and army boots". There's an army jacket informed by the Canadian military, a tweed overcoat based "on my father's old coat that my mum used to wear in winter with a dress underneath, driving us to school", while a croc-print frame handbag is inspired by her clutch that was always left open.

Designing his first ever menswear line as part of the collaboration, Moralioglu's garments passed between genders. "Once I'd finished fitting a Harris Tweed suit, I'd take it off the boy and put it on the girl and it just looked amazing. So then came the Harris Tweed suit for women — it's one of my favourites." His aim was to create a wardrobe that its wearer can put together and take apart. "It's a collection of pieces that have a permanence about them, which is almost the antithesis of this idea of what fast fashion is." It's anything but "Being Boring".

Posted by FASHIONmode News at 2:14 PM