This month, Levi’s celebrated the 50th anniversary of its trucker jacket by inviting 50 close creative friends and collaborators (a cross-section of fashionable culture from Vogue Paris’ Emmanuelle Alt to legendary Belgian design duo AF Vandevorst) to redesign its landmark denim piece. The brand toasted it with an exhibition and party in West Hollywood. On the bill: Snoop Dogg DJing and sets by Solange and Chance the Rapper.

Naturally I was honoured to help them celebrate, and in packing came across a completely obscured version of the jacket I forgot I had, originally belonging to my late father. Mercifully returned by an ex- boyfriend a couple of years ago, the jacket bears a label reading “Made in Australia” and family legend has it that the curiously-textured suede is that of kangaroo. I romantically hold on to the notion, and can partially support it with admittedly cursory research.

A quick history lesson on the trucker: born in 1967 as the third generation of the Levi Strauss jean jacket, the trucker was gifted its name by a Japanese market who characterised the classic piece of Americana as typical garb of coast-to-coast truck drivers. Mostly (but not always) hewn of denim, the trucker’s defining features include the diagonal seams beneath each pocket that taper in a chevron to the hem. The same year, that of the nostalgia-steeped Summer of Love, saw George Harrison gather a crowd of followers as he wore his own trucker to visit a relative in San Francisco. 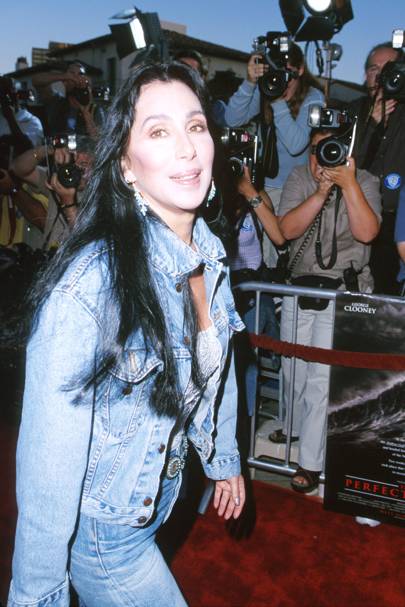 The denim jacket belongs to American pop culture as much, if not more than the blue jean. From Martin Sheen’s Badlands bad boy to Madonna in early incarnation as ingénue starlet, the garment has been a canvas for countless reinventions and projections of youthful, earnest bravado. Indeed it doggedly persists into modernity: Levi’s newest evolution of the trucker comes fashioned in jacquard, a groundbreaking new fabric developed with Google incorporating an intelligent yarn that can read and act upon a wearer’s movement; a still-nascent technology but with untold possibilities for the future. So wherein lies the longevity of the garment? Perhaps it is the well-built nature of the piece. Proven in endless destroyed and deconstructed versions: you can bleach, you can shred, you can wash with stones and the denim will never break - at least not enough to withstand at least one more inheritance.

And so I inherited my father’s trucker, one even tougher and (purportedly) made from a suede 10-times stronger than cowhide. I hope it went with him to the Isle of Wight Festival in 1970 and to countless gatherings of mods on Brighton beach he grew up on. I might only have worn it with pseudo-grit to a glamorous gala for its own golden anniversary, but I know enough to say it will mean something else to someone again, somewhere down the line.