The original inventor of the burkini, Aheda Zanetti, has said that the furore surrounding the cover-up - which has been banned by French authorities - is "misunderstood".

"I think it's totally misunderstood. I feel so sorry for the people who are going to be affected by it," Zanetti told WWD of the ban which has been implemented in up to 15 beach resorts in Nice and Cannes. "The burkini was intended to integrate and bring people together. To give them the freedom of choice to wear something modest if they choose to be modest for whatever reason they need to be modest for. It should be happy and positive. It is turning something meant to give women the freedom of participating in health and fitness into a negative thing."

This weekend in Cannes, three women wearing burkinis on the beach were each given €38 fines by police patrolling the shore, while images have surfaced this week of authorities ordering bathers to remove their burkinis on a nearby beach. Last week, a French court upheld the ban following complaints from human-rights groups, saying that it "was necessary to avoid public disorder after a wave of attacks by Islamic extremists, including the murder of 86 people mown down by a lorry in Nice last month", reports The Times.

The mayor of Cannes's ban states that: "Beachwear which ostentatiously displays religious affiliation, when France and places of worship are currently the target of terrorist attacks, is liable to create risks of disrupting public order," reports the BBC. 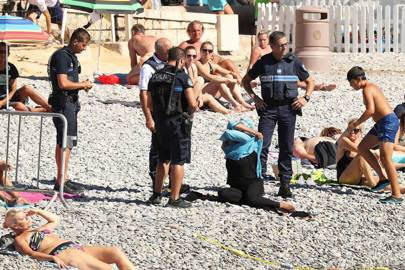 Zanetti, who counts her customer base as 60 per cent Muslim, with the rest being "non-Muslim who want to cover up for a number of reasons", said that while she has had a few negative reactions to the swimwear in her native Australia, she has become a voice for women's rights.

"I think the French need to understand what a burkini swimsuit is and what it's there for. They can't take a lifestyle away from a Muslim woman or any woman for that matter," she said. "The cancer patients, for example. If you are going to take away the right for them to protect their skin from the sun, what are you trying to do? Put them back inside their home?"

Zanetti's comments come as Italian beach resorts close to the French border say that they have seen a "surge in burkini-clad bathers", according to the report by The Times. The mayor of Alassio - just over 100km from Nice - has said that they have no intention of imposing the ban, a sentiment echoed by the Italian interior minister. "I don't pray to Allah, but I was educated in a culture that involves religious freedom," said Angelino Alfano.

Posted by FASHIONmode News at 11:46 AM