Next-Up On Dua Lipa’s Jam-Packed 2020 Schedule? A Collaboration With Puma

“My very first memory of Puma was when I was around six or seven years old and my Dad bought us a pair of matching burgundy suede sneakers, they were my favourite shoes!” Dua Lipa told British Vogue.

Nearly a decade on from when the singer wore her father-daughter Pumas, she is set to join forces with the brand in a professional capacity, working on a series of collaborations. “From performance rehearsals to hiking in the hills, it’s important to feel comfortable and look good,” she remarks. “I’ve got so many ideas for the projects and campaigns I’ll be taking part in, and look forward to bringing them all to life with the Puma team.”

As the new face of the brand, Dua will feature in numerous campaigns and support empowering initiatives to inspire women all over the world. From next year, she will headline Puma’s She Moves Us project, a female-focused partnership that champions connectivity through sport and culture.

To kickstart the collab, Puma will serve as the key sponsors of the star’s highly anticipated Studio 2054 project. Set to be livestreamed on 27 November, Dua’s virtual world comprises a series of killer performances: just this week, she announced that FKA Twigs has joined the glittering line-up. 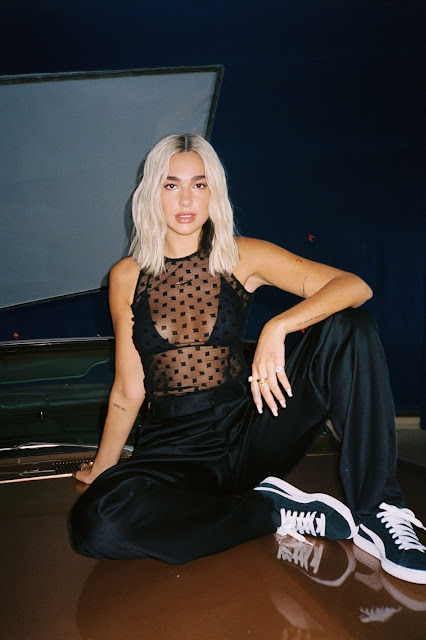 Teasers of her active calendar appointments and non-stop rehearsals have dominated the singer’s Instagram feed of late. True to her fashion aficionado status, each post has debuted multiple stylish looks, the majority of which have featured new sparkling additions from Italian jewellery brands Eéra and Bea Bongiasca.
Hot on the heels of her Future Nostalgia album launch – whose track list features the likes of Madonna, Missy Elliott, Gwen Stefani, Mark Ronson and Yaeji – Studio 2054 acts as a culmination of Dua’s jam-packed 2020 schedule.

Since turning 25 in August, the singer has released a TikTok music video for her upbeat intergalactic tune “Levitating,” and a similarly melodic song entitled “Fever” co-starring Angèle. And if that wasn’t enough, the former Vogue cover star has hosted an Instagram Live conversation with Elton John, appeared on The Tonight Show With Jimmy Fallon and received a duo of AMA nominations for Best Song Pop/Rock and Favourite Female Artist Pop/Rock.

“I guess I kind of never stopped really,” she told British Vogue last month, speaking of her perennially busy diary. “I do really enjoy just like, cooking and being at home. It’s something I don’t really get the opportunity to do when I’m travelling so often,” she added.
Posted by FASHIONmode News at 2:03 PM