As lockdowns keep the future of fashion shows in limbo – and customers away from stores – Dolce & Gabbana have come up with a digital answer to both challenges. Stefano Gabbana speaks to Vogue about the designers’ newest initiative: monthly digital see-now-buy-now runway shows.

If the pandemic has been posing a threat to the runway show, Dolce & Gabbana have no intention of giving in. Today (13 October) the designers are releasing Walking in the Street, the first in a new monthly series of digital capsule shows released on their website, DolceGabbana.com. “While everything is in development, we try to make something different,” Stefano Gabbana explains on the phone from Milan. “Not to ‘stay alive’,” as he puts it, but to get with the programme; to embrace change. “At the moment, the problem with the market is that people can’t go shopping in stores. So, it’s about e-commerce and social media.”

Released every 30 days, the see-now-buy-now shows will be captured in a moving runway format with about 10 models, 35 looks, and no audience. They will showcase a mix of the brand’s pre collections and new looks designed with each mini-show’s theme in mind. The capsules are separate to the ready-to-wear collections Dolce & Gabbana intend to continue to present to an audience in Milan twice a year, if Covid-19 restrictions permit. “Pictures are beautiful but they’re too static to speak to a big audience. A show allows an audience to see things much better and understand what you do. Every month we’ll be making a capsule collection with a real show, with models, hair, make-up, everything!” Gabbana says. “It’s a big investment.”

Ever since the pandemic put the importance of runway shows up for debate, Dolce & Gabbana have been staunch defenders of the classic presentation format. When July’s haute couture presentations came around and other houses produced moving editorial, they staged a pre-recorded, audience-less fashion show in the classic runway style. When the delayed men’s shows took place that same month, Dolce & Gabbana were the first to return to the live catwalk, albeit with limited attendance. It was followed by three more live shows in September. 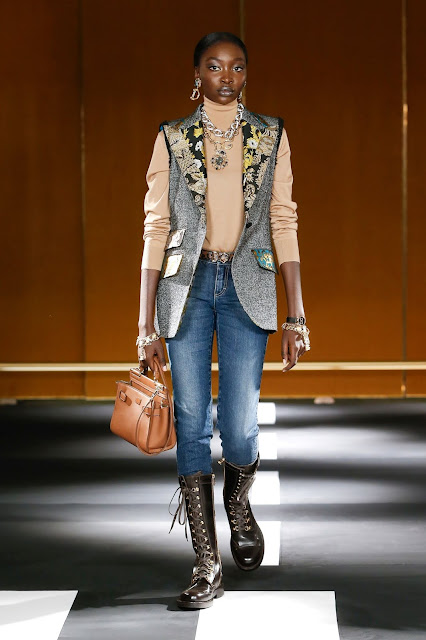 “For Domenico and me, the show is the most important thing. We can give the audience a different story than we can with a picture,” Gabbana says. For these designers, sticking to the runway isn’t about vanity or refusing to move with the times. It’s about a presentation format that has historically worked for their business, and one that the fashion industry – despite many alternative ideas – has kept returning to for that same reason: communicating your vision and product to the customer in the clearest way possible. Right now, that’s more important than ever.

“In Europe, from March until now, things have been working very slowly. We’ve lost a lot of money,” Gabbana admits. “We’re working well in Asia through the stores, and in North and South America through e-commerce. We’ve put a lot into e-commerce in the last few months, so we’re thinking about what we can do to make something new and different. We don’t know if it’s going to work or not, but we’ll try,” he says, referring to the new digital capsule initiative.

The first one, released today, takes inspiration from the urban D&G wardrobe of the 1990s: tailored jackets, lace tops, ripped jeans and trainers. (“The second one will be totally different,” Gabbana says, emphasising the freedom that comes with the monthly initiative.) Made immediately available to customers, the capsule collections are openly a more commercial gesture than the designers’ ready-to-wear collections. In a time of uncertainty, that’s crucial.

Ten days ago, Gabbana says, he and Dolce temporarily halted production on their next Alta Moda haute couture collection – which normally shows in early December – because they simply don’t know when they’ll able to present it. Similarly, “a client from Moscow wanted to try a dress, but we can’t send anyone there to do the fitting. For this reason, we’ll probably also have to do the Alta Moda show digitally in January.” As for the men’s show that same month, and the women’s show in February, “We need to wait and see. Every day is a new day. I hope we will have a [live] show, but for sure we will do something, digital or otherwise.”
Posted by FASHIONmode News at 6:42 AM