Vogue And The CFDA Set Up Shop On Amazon

Amazon is taking a Vogue-sanctioned step into designer fashion. The online retailer is setting up a shop with the American magazine and the Council of Fashion Designers of America that will sell items from 20 independent designers, including Phillip Lim 3.1, Derek Lam and Tabitha Simmons. The e-commerce hub will be branded Common Threads, referencing Vogue and the CFDA’s A Common Thread fund, set up to help designers struggling amid the pandemic.

It will be merchandised by Vogue and Amazon's fashion division, which also donated $500,000 to the fund. The hope is that struggling designers can benefit from Amazon’s success during the pandemic. The crisis has slashed fashion shopping, with analysts saying luxury spending is down by one-third or more.

But Amazon’s reported sales shot up $15 billion year-over-year in the most recent quarter. However, those gains have mostly come from shoppers stocking up on essential goods. Though Amazon is one of the world’s biggest apparel retailers, it’s better known to consumers as a place to stock up on cheap basics rather than designer dresses.

The new shop includes a mix of brands that already sell on Amazon through its fashion subsidiary Shopbop, including Lim and Victor Glemaud, as well as some, including Batsheva and Alejandra Alonso Rojas, that weren’t previously available on the platform. 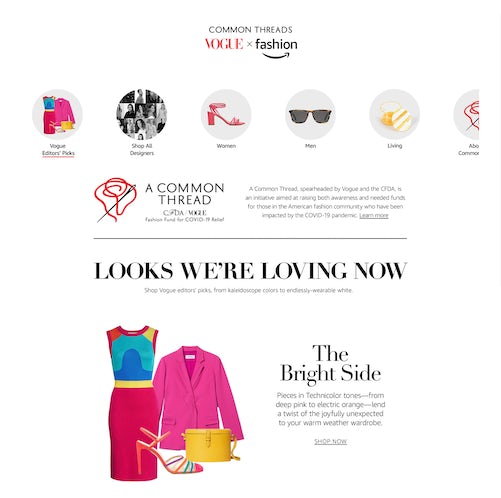 “This is such a big opportunity for a type of exposure that a small New York City, made in the USA kind of brand doesn’t really have,” said Batsheva Hay, whose brand is known for its patterned, vintage-inspired dresses.

While the entire fashion industry is struggling as a result of the global lockdown, independent designers, who operate on razor-thin margins and rely on multi-brand retailers like department stores and e-commerce sites to sell their wares, have been hit particularly hard. Many are awaiting overdue payments from wholesale partners, or are stuck with extra inventory. Some didn’t have e-commerce operations of their own before the pandemic and haven’t been able to pivot in the middle of a crisis.

A Common Thread, which Vogue launched with the CFDA on March 24, has raised $4.3 million to date, according to CFDA President and Chief Executive Officer Steven Kolb. The first round of money will begin to be distributed to designers at the end of May, with a second round planned in mid-June, said Kolb.

The British Fashion Council in the UK and other regional trade groups are also raising money to support the industry’s smallest players. “It has been like steering a boat into a tsunami,” said Glemaud, whose namesake brand offers casual attire under $1,000. He said that, before the pandemic, he and his small team didn’t have time to design a collection and “sell it and market it and run it on a website all at the same time.”

Designers selling on the platform can set their own prices. They pay Amazon a referral fee to be a part of the shop and pay an additional fee if they opt to have Amazon handle the shipping. Vogue and Amazon will advertise the shop on their websites and social media channels. 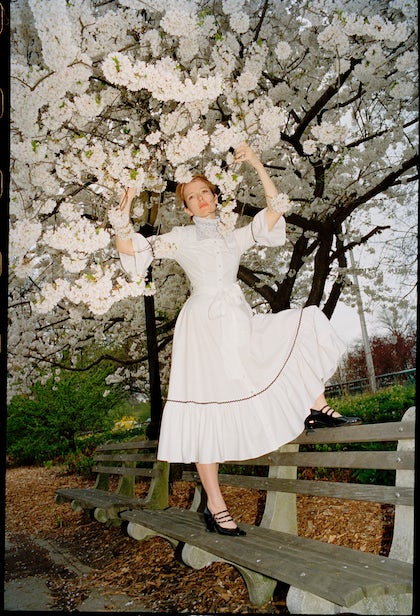 Amazon has been trying for years to become a luxury fashion destination. Despite its massive reach and logistics network, the marketplace’s utilitarian aesthetics and the presence of knock-offs turned off many brands. Amazon is reportedly working on a new luxury platform, but luxury leaders like LVMH’s Chief Executive Officer and Chairman Bernard Arnault are staunchly against selling on the platform.

“Amazon wasn’t something that people would tell you to do if you’re a small designer,” said Hay. “I love the idea of direct to consumer and I’m trying very much to expand that, but it’s not easy.” The Common Threads shop could serve as a proof of concept that convinces other designers to consider Amazon as a point of sale coming out of the pandemic, which will likely force multi-brand fashion stores to consolidate. Neiman Marcus, for example, filed for bankruptcy in early May.

Meanwhile, the CFDA’s Kolb said the online store's namesake fund is talking to donors about additional funding rounds beyond June. “Does this become something more permanent in 2021?” he said. “We haven’t even spent that much time considering it because we have been so focused on the triage.”

With economists predicting a slow recovery, the trade organisation will likely need to find more ways to support challenged designers in the coming months. “While there isn’t one simple fix for our industry, which has been hit so hard, I believe this is an important step in the right direction,” said Vogue Editor-in-Chief Anna Wintour in an e-mail.

Posted by FASHIONmode News at 7:16 AM