Maria Grazia Chiuri is set to receive the Swarovski Award for Positive Change at the 2017 Fashion Awards.

The award, presented for the first time last year to the late Franca Sozzani, recognises and celebrates “individuals who have made a positive impact on society, the environment or both, and forms part of Swarovski’s efforts to promote a more sustainable future,” the British Fashion Council announced this morning ahead of the December 4 ceremony at London's Royal Albert Hall.

“As Christian Dior’s first female creative director, Maria Grazia has combined her own longstanding commitment to female empowerment with true creative magic, to bring today’s most vital conversations to fashion’s front row,” Nadja Swarovski, member of the Swarovski executive board, said of the Italian designer who cut her teeth at Valentino working alongside Pierpaolo Piccioli.

Commenting on her efforts to connect feminism and fashion, Chiuri said: “The feminist movement that has been mine for the longest time has finally struck a resonant chord in society, and this recognition sends a powerful message to all women battling on a daily basis.” 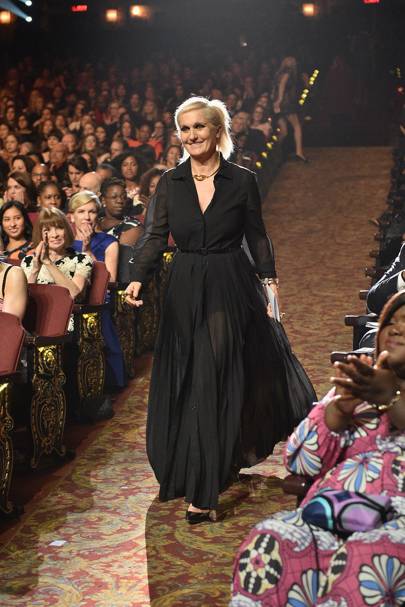 Since taking the helm of the French luxury house in July 2016, Chiuri has turned political essays, including Linda Nochlin’s Why Have There Been No Great Women Artists? and Chimamanda Ngozi Adichie’s We Should All Be Feminists, into products that are not only politically aware, but have garnered cult status.

"I try to speak about women now, and for the future. Dior has to be about female empowerment. Only with flowers? It’s not enough," she told Vogue of her first year at Dior. "I know that there are a lot of nostalgic people that want a world that references the past and [Dior in] the 1950s... But if I’m a modern woman who wants a vintage dress I go to Didier Ludot and I buy an authentic Dior dress. If I go to the [Dior] store, I want something that speaks about the heritage, but in a modern way, for contemporary life. I know there are other points of view, and I respect those, but that’s my point of view."

Posted by FASHIONmode News at 10:05 AM