Day 2 of TOM* and the line up continued to promote and portray men’s fashion in all its various forms and facets. From new faces to established brands and celebrity models to celebrity attendees, this was another action packed evening in downtown Yonge. A very special runway show supporting local charity Men´s Fashion 4 Hope meant that this was one day that were not going to forget quickly within this bi-annual fashion celebration.

The Toronto based men’s label presented a strong vision for the future. A harmonious fusion of rough mesh fabrics were set against smooth sheer neoprene counterparts. The palette was very simple and clean, almost monochromatic (with blue). This trend of slim fitting leggings / pants is one which is going to be seen many times next year. 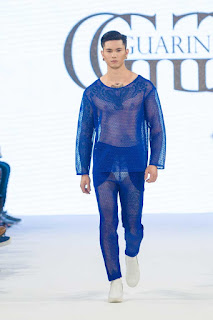 Is another newcomer to the TOM* Toronto fashion scene. First I saw vintage, then ethnic, then American retro, then a very sober jacket and trouser look. This collection was eclectic, eccentric and broad spectrum to say the least. The 1955 ´Peggy Sue´ bowling style shirt was a winner on its own. 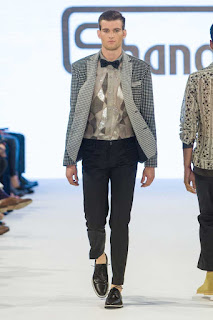 The Montreal based luxury label took the everyday staples of a man´s wardrobe and made them more ´interesting’. This super hip brand mixes casual styling with contemporary elements (and a lot of leather). Snazzy but lustrous silhouettes brought a contemporary ´gloss´ to casual dressing. The hooded leather jacket was one of the key looks of the day. 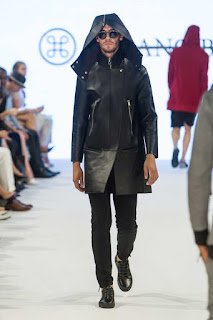 Local celebrities, brands and sponsors all united for this runway show, who´s aim is to raise money for the support of TOM*´s founder Jeff Rustia´s Kol Hope Foundation and the Hospital for Sick Children. From its inauguration last year, this noble cause intends to augment in exposure alongside TOM*´s increasing annual profile. Superstars and local personalities such as Lennox Lewis, Pan Am CEO Saad Rafi and the cast of Saving Hope (to name a few) took to the runway in a highly engaging selection of looks from menswear store sponsor Gotstyle. This touching philanthropic moment was hosted by Jeff, who took a moment to explain the importance of his dear son´s memory and the rich legacy he has left behind. A tribute to the recently departed Chris Hyndman was also conveyed before the runway exploded into a nine minute fashion extravaganza. 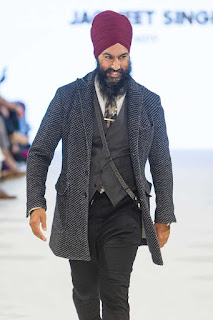 Another visual extravaganza of experimental aesthetics. The Montreal based designer softly shocked his audience with a lot of androgyny (think denim bustiers), exposed torso´s (bordering sometimes on almost-frontal-nudity). There were strong elements of J.W.Anderson and Rik Owens here. Oversized outerwear and printed slogans gave this collection a further element of interest (as if it needed it). For me, the heavily perspiring, exhausted models with ECG patches slapped onto their body was a very clever nod to McQueen’s UNTITLED / VOSS runway shows, and it did not go un-noticed. 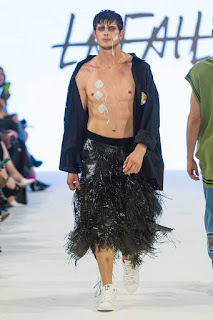 This recently rebranded luxury label (Formally HD Homme) hit the runways for the first time under its new name. Toronto born with East African roots, Hussein Dhalla presented a collection of street inspired, masculine and causal elements in blacks, greys and camouflages (with flashes of white). There was some sexy tailoring and a little bit of rock star confidently tucked away in here. 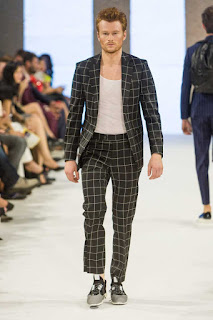 Posted by FASHIONmode News at 6:30 PM