August saw the third instalment of Canada´s most up-and-coming fashion event, Toronto Men’s Fashion Week (TOM*). The runway shows commenced on Wednesday 19th after several days of exclusive launch events within the city. The three day fashion event is the brainchild of media personality and businessman Jeff Rustia who wants ´to put the menswear market for the city firmly on the map and to showcase national and international talents under the brand of TOM*.´

Located in ´downtown´ Toronto´s Yonge Street, the historic College Park centre played host to a three day visual extravaganza of what the intelligencia of fashion thought that we should be wearing for the spring/summer 2016 collections. The first day was a fusion of street style, Avant Garde and tailoring from local labels within Toronto, then further afield to Montreal and California which as a whole, set a very nice standard for an initiation into our first attendance at Toronto Men’s Fashion Week.

Here are my highlights from the Torontonian talents first day;

I saw rebellion, androgyny and international influences. This collection in its entirety was a little more innovative than the normal trend of urban street fashion. It was certainly one of the more diverse servings from the first day, and the entirely the better for it. This designer is based not too many blocks away ´downtown’. This tongue in cheek collection fused playful neon pop prints alongside architectural silhouettes and Renaissance influences. Its philosophy and colours worked very well as our initiation into an urban summer beach feel. 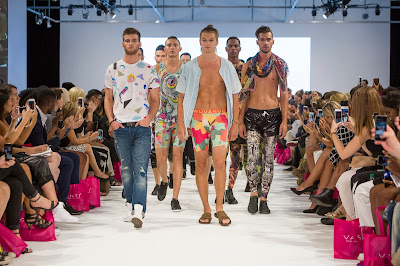 Montreal´s designer-in-residence presented a collection that was sharp, clean, retro and utilitarian. For me, elements of this collection and its muted palette were a little nostalgic. A good allowance was made for the transition from day wear to night wear for the contemporary millennial man. 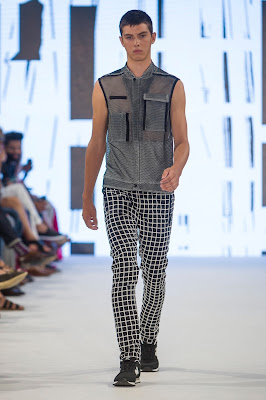 Blade runner fantasy? This Iranian / Austrian designer presented a lot of experimental aesthetics in the form of A-line dresses, coats and hats in black, white and camel. For me this was a very European collection with Belgian influences. The nu-millennium head pieces actually complimented this rather intelligent collection. 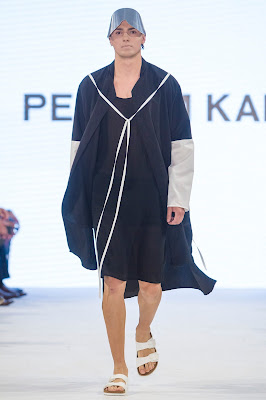 This collection depicted uptown chic and lit up the evening runway. Bright and colourful suits sat alongside the classic jacket and trouser combination in solid, floral and graphic prints. An excellent reinterpretation of slouchy, informal tailoring for the longer, stronger days. 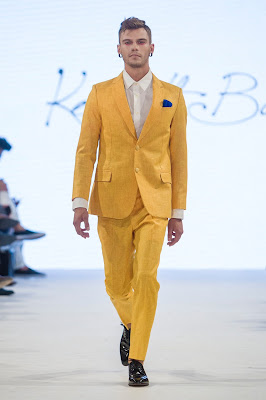 The last show of the evening, but certainly not the least. The perfect recipe for engaging an audience are ripped male models in swim wear. Classical beach / swim shots in the full spectrum of colours. I loved the more acidic tones. 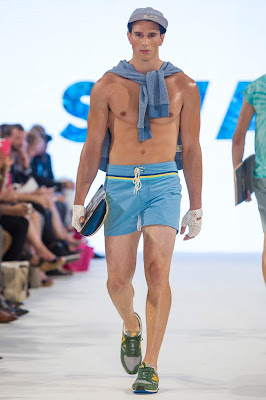 Posted by FASHIONmode News at 12:31 PM