Catherine Baba - The Most Stylish Woman In Paris

They say that the aesthetic of the ´fashion folk´ that live and work in Paris is far greater than the buildings and monuments that surround it. If this is the case, then one of the brightest in the city of lights has to be Catherine Baba (the celebrity stylist and muse of Mario Testino) who was recently voted ´The Most Stylish Woman In Paris.´

Sant Germain De Pres has many small streets with many cool people. To recognise someone instantly is not easy, unless they are a small figure clad in the look of another era with a turban and huge sunglasses, pedalling nonchalantly on a bike with 12 centimetre high heels. Catherine Baba is a very wonderful fashion apparition who lives by her work ethic of ´evoking a language from a style that exists and taking it further.´ And, she literally does just that. 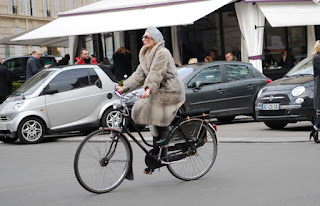 Kooky, quirky, vintage, retro, eccentric and decadent are just some of the adjectives used to describe ´La Baba´. Catherine is Australian by birth but has lived in Paris for over two decades now. This literal bible of vintage fashion has been revered by everyone from Carine Roitfeld and Grace Coddington to Marc Jacobs and Karl Lagerfeld. Aside from Anna Piaggi, it is hard to think of anyone more daring and bold in Europe today.

There are many ´rumours´ about Catherine in her adopted Paris (mostly about her real age). She once listed her age as 77, but this could perhaps been a reflection of the year she wished to have been born in. As she put it, ´The golden age of style, darling.´ While all the other fashion folk are bang on trend, Catherine is replacing borsalinos for elegant turbans, baseball jackets for fur coats (always vintage) and mobile phones for an eternal tipped cigarette. 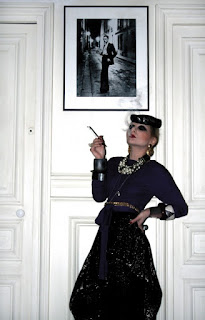 Catherine´s vocabulary is equally as famous as her image. ´Babaism´s´ - such as the use of ´j´adore´, ´voila´ and ´d´accord´ in every other sentence sit beside dadaisms such as ´I´m a slave to accessories. Belts are my oxygen´.

Her current inspirations range from Greta Garbo, the styling of Edward Steichen while embodying the fetish woman within Yves Saint Laurent with a little bit of Gianni Versace. (It would be of no surprise to note Irina Lazareanu, Norma Desmond and Marlene Dietrich all gracing the walls of her boudoir as well.) 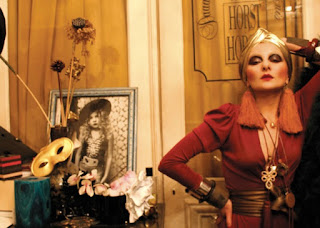 Catherine is not your typical commercial fashion stylist. She lives, breathes and works in the golden era of vintage (think 20´s and 30´s vintage high camp alongside bespoke Hollywood glamour pieces which she mixes up with a dash of Stevie Nicks gypsy and 70´s disco diva hair and make-up with barely there brows). She caused a controversy back in April 2010 with PETA by stating in a Vogue interview that she only wears vintage fur.

Notorious for arriving at all of the Paris shows on her bicycle, which she rides while wearing her trademark high heels, Catherine´s portfolio is just as impressive as her wardrobe. Having worked for brands such as Givenchy, Ungaro, Balmain and Chanel as well as magazines like Dazed & Confused, vanity Fair and Vogue, her experience is as rich as the embroidery on her turban collection (to date she has around 100, or so, she thinks). 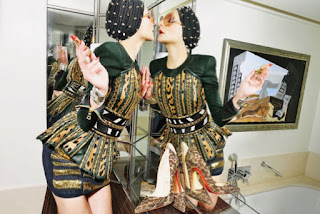 Earlier this year, Catherine signed a partnership with the jewelry firm Gripoix, to produce a collection of 12 pieces of jewelry as excessive and iconic as her and should be available to covet later this year.

This means whoever you are or wherever you are, you can soon have a little piece of Catherine to glamourise your day.