Ann Demeulemeester has been dreaming about the kind of adventuress that Arthur Rimbaud, the nineteenth-century poet hero of her men's Spring collection, might have come across during his self-imposed exile in Africa. Demeulemeester even has a bio for her. 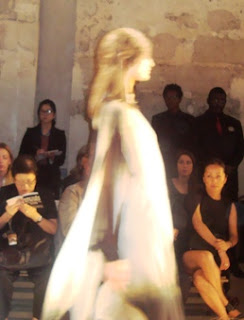 Isabelle Eberhardt was a Swiss writer who traveled extensively in North Africa in the late nineteenth century. She usually wore men's clothing, because she had more freedom of movement that way. In one photograph from her brief life, Eberhardt is dressed as a sailor. "I had to invent her," Demeulemeester said, minus the Indiana Jones hats, one hopes. But, in Eberhardt's case, truth truly was stranger than fiction, and that made her a dream muse for the designer. 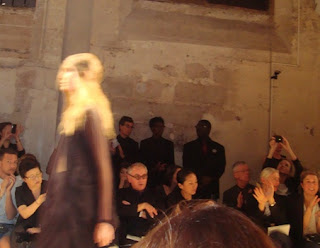 The creature Demeulemeester created was part androgyne, part decadent, a poetic hybrid of East and West. As she did with her men's collection in June, Demeulemeester imagined a European wardrobe "infected" by the tribal dress her explorer encountered. That might start with something subtle like a striped, tailored blazer with tassels dangling off its buttons, or a trenchcoat de-structured till it was a soft kimonolike wrap. In the middle somewhere, there were slouchy openwork knits and a jacket over-embroidered to look utterly exhausted. 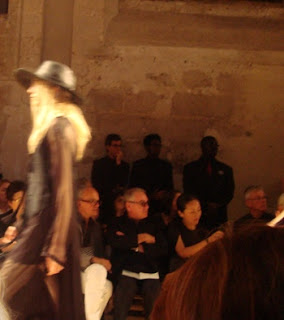 Then came the more exotic pieces: the black silk tulle caftan with a trim of beads, the embroidered waistcoat with a trail of fringes. A sheer asymmetrical top and skirt appeared in an ombré that evoked a dust storm. With the spectral pulse of Harold Budd on the soundtrack sounding like mournful desert winds blowing through abandoned casbahs, Demeulemeester delivered one of her most seductive dissertations on la femme perdue. 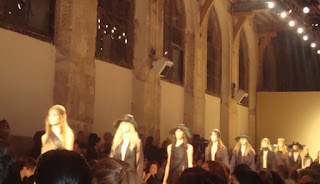 With very special thanks to the team at Ann Demeulemeester / Haider Ackermann  BVBA 32 for  exclusive privilages afforded to us during the shows.

Posted by FASHIONmode News at 1:48 PM