Olivier Lapidus is stepping down as artistic director of Lanvin, effective immediately. The women’s collections will be designed by an in-house team in the interim, and Lapidus will resume designing for his eponymous brand, Maison Lapidus.

Manager Nicolas Druz is also exiting the house, and Joann Cheng, president of Fosun Fashion Group and chairman of the board of directors of Lanvin, will fill the role during an interim period. The senior management shifts mark the first big business moves of Fosun International after the Chinese conglomerate bought the French label last month.

Lapidus presented his first Lanvin collection during the recent Paris autumn/winter 2018 shows after joining in July, at the request of Taiwan-based majority owner Shaw-Lan Wang - then owner and president. He succeeded Bouchra Jarrar, who took the creative helm of the brand for two collections, but left in July after a mutual decision to end the collaboration.

“Olivier steered the maison through a transitional period between ownerships,” said Cheng in a statement. “We thank him for that, and wish him every success for his own brand and future endeavours.” 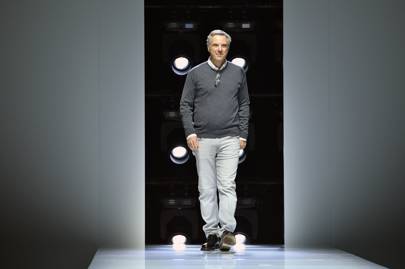 Lanvin has experienced a period of unrest since Alber Elbaz departed the brand in October 2015 after 14 years. In response to his removal as creative director, which was acrimonious after the designer was forced to defend his work amid poor-quality claims, the Lanvin staff revolted. At the time, the house - still controlled by Wang - seemed nonplussed by the dissenters.

“Lanvin has been in existence for 125 years. It must go on,” a spokesperson said. “We are not going to close the house because our creative director is gone. The teams are hard at work. They continue to work, even if it is an emotional time."

Over two years on and two creative directors and a major management overhaul down, the same sentiment has been echoed by Cheng, but with a focus on the benefits the brand will have now it is backed by the Fosun Fashion Group: “Lanvin is a truly iconic and storied brand with immense potential. By being a part of the Fosun Fashion Group, Lanvin’s future growth can leverage resources from the expansive global platform of Fosun’s established companies and experts.”