Haider Ackermann On Fantasy: “We Are Faced With Reality Enough”

The Colombian-born designer Haider Ackermann is, in many ways, part of fashion’s fading gentry. A highly skilled tailor who has shunned logophilia, he’s a visionary who finds inspiration from the streets – as evident in his bestselling velvet sweats and bomber jackets worn by the likes of Kanye Westand A$AP Rocky – but one who’s been careful not to succumb to the hype of streetwear.

He’s also that rare and impressive thing: a designer who is a fixture at both Paris Fashion Week, for his womenswear collections, and its counterpart for men. Earlier in his career, Karl Lagerfeld heralded Ackermann as a talent worthy of succeeding him at Chanel. His primary collections, comprising jersey wrap-over dresses, harem pants and immaculately-cut tailoring, coloured with a polished palette of blues, blacks and greys, were shown on the Paris catwalks to critical acclaim. But these days, his eponymous label is just as well known for its menswear. And in 2016, he was appointed creative director of Berluti, the only men’s-focussed luxury brand under the LVMH umbrella.

“Suddenly, men appeared, because I was wondering, who was the man behind an Ackermann woman?” Ackermann tells me, one rainy day when we meet at his unmarked studio in the 8th arrondissement of Paris, a few days before his autumn/winter 2018 womenswear show. The Bohemian collection he exhibited at Pitti featured layered silk tops alongside opulent brocades fit for a Silk Road merchant. According to Ackermann, the introduction of men's garments to complement the womenswear was what he describes as a “mental seduction”. He had hoped to give more attitude to the woman through the man by her side. “It was an exercise of style, a trying-out.”

What is he “trying out” today? Certainly not chunky dad trainers or hoodies plastered with a brand’s name. “Do you know how many sneakers they’re selling in the world? It’s insane,” he raises his voice slightly. To this day, Ackermann still sees himself as a purveyor of stories and dreams, not only clothes. “You just have to think about the story you like to tell,” he continues. For his spring/summer 2018 womenswear collection, the designer sent out asymmetrically cut golden blazers that appeared to crumble on one side, like shifting tectonic plates, alongside white jackets cut with red revers, like delicious red velvet cake. For Ackermann, creativity comes before commerciality, in his words: “We are faced with reality enough: the designs that I have made me travel with my mind, and I like that - I think that’s luxury.” 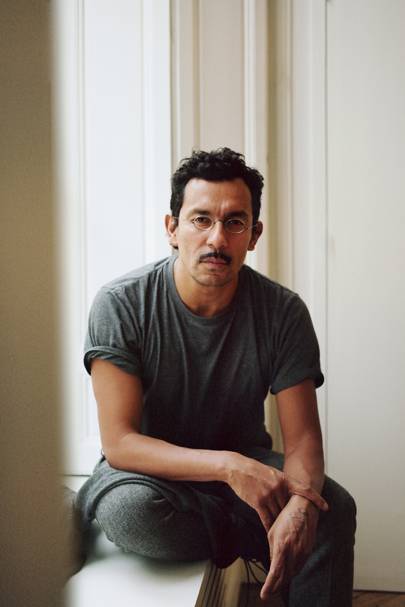 Although his clothes have been worn by a cast of A-listers over the years, including Tilda Swinton and now Timothée Chalamet, Ackermann assures me he isn’t interested in playing the celebrity game. “One has to be careful because it’s uninteresting to read articles where they first talk about celebrities, and then the clothes,” he warns me. “The first row is taking more attention than the clothes on the catwalk nowadays.”

It’s an epidemic that the designer attributes to social media. Ackermann, like 800 million others around the globe, is on Instagram. He’s aware of the culture of calling-out that the platform fosters. “I think due to social media, and everything that happens nowadays, everyone has an opinion,” he says. “But one should always have an opinion that is loaded with knowledge and history.” I ask if he’s referring to any accounts in particular. “No, I can’t [say],” he replies, laughing. “Nowadays, whether it’s in fashion or in general, everyone can throw their garbage out there, accusing anyone and everyone.” He continues: “It’s this public scenery, where you burn witches in the fire - I find it too vulgar for words.”

What constitutes over-sharing, in his eyes? “My life is so uninteresting to be shared, and I don’t see why someone is interested in how I wake up in the morning,” Ackermann says. “That’s not my job; my job is to make nice clothes, to search for a type of beauty - if a man or a woman feels attractive in it then I did my job.”
Posted by FASHIONmode News at 11:18 AM