Stella On Her Love Affair With Pringle

"I grew up near Hawick so I've been aware of Pringle forever," Stella Tennant told us at the launch of Pringle of Scotland's new knitwear exhibition in London yesterday. "This is a brand that has a 200-year tradition of innovation, clever engineering and an incredibly rich heritage. Pringle presents a really powerful identity, as does Scotland as a country, and that comes through in the contemporary and modern garments that we see today." 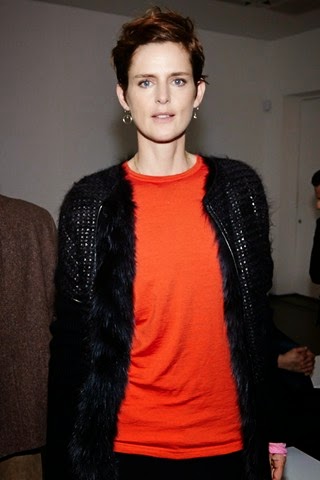 Created as part of the brand's bicentennial birthday celebrations, the exhibition traces the brand's history from 1815 to 2015, and will leave London's Serpentine in a few days time to head back north of the border. Entitled Fully Fashioned, the exhibition follows Pringle's evolution from small hosiery firm to international fashion house, and features brand imagery of Tennant, as well as artists David Shrigley and Robert Montgomery, actor Luke Treadaway and Edinburgh Fashion Festival founder Anna Freemantle, all shot by Scottish photographer Albert Watson.

"For me, the most powerful part of the exhibition is the moment when you see the all-in-one hosiery and how clean and modern it is," Tennant explained. "Its simplicity means that it's a timeless undergarment that could be given a context in any decade. You can't quite believe that it's 200 years old because it's something that would be wearable now."

The exhibition includes three short films choreographed by Michael Clark, which explore the role of knitwear in the development of the modern wardrobe including archived items drawn from the Royal Wardrobe, Hawick Museum and The Women Golfers' Museum.

"This bicentennial milestone is so significant when you consider that Pringle was around during the industrial revolution when knitwear wasn't considered fashionable because it was worn as underwear," Massimo Nicosia, the label's head of design, told us. "In the 20th century, Pringle first proposed knitwear as outerwear and subsequently provided sportswear for women when they were given access to golf courses and sports clubs."

"As a designer I enjoy the glamourous side of fashion and think the Fifties was the most pivotal point for Pringle in terms of its image," Nicosia added. "It was all about show-stopping airport arrivals with celebrities wearing the Pringle twinset and carrying the handbag of the moment. Times haven't changed really; women still enjoy making that kind of statement today."

"Fully Fashioned: The Pringle of Scotland Story" will be open to the public from Friday April 10 until Sunday August 16 2015 at the National Museum of Scotland in Edinburgh. The exhibition will then tour America and Asia.

Posted by FASHIONmode News at 10:30 AM