Cara Delevingne might have retired from modelling to pursue a career on the silver screen, but she has topped a new estimated list of Britain’s highest-earning models thanks to continued lucrative work with Chanel, Rimmel and Puma.

The 24-year-old model, who hung up her runway stilettos in 2015, reportedly earned £8 million last year, according to a recent survey, which looked at catwalk day rates and commercial deals. If the statistics are true, it will mean that Cara Delevingne not only earns roughly £22,000 a day, she has taken the crown from Kate Moss, who is said to have earned £5m in the last year.

While Kate Moss has profitable contracts with Equipment and Rimmel, she lacks the social media influence of Cara Delevingne. The model-turned-actress has over 40 million Instagram followers, which is a powerful incentive for brands looking to push products to a larger audience, particularly the Instagram generation. Moss joined the platform in September 2016 via her modelling agency, and has 630,000 followers, in comparison. 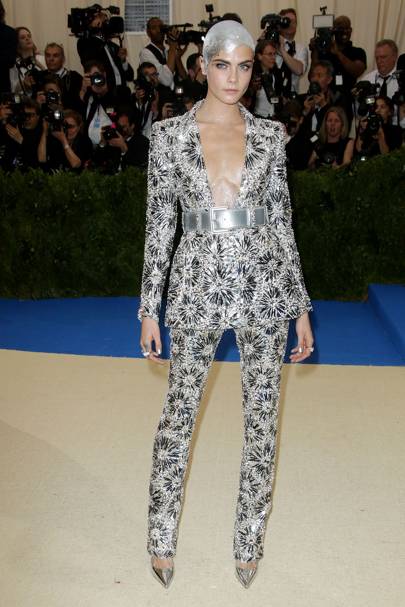 David Gandy, the only male model in the new list, comes in fourth place, with a reported annual salary of £4 million, thanks to contracts with Marks & Spencer underwear and Dolce & Gabbana fragrance.

If the study is accurate, fifth place is awarded to Naomi Campbell with an annual salary of £3 million. Georgia May Jagger, Edie Campbell, Jourdan Dunn, Erin O’Connor and Lottie Moss follow, respectively.
Posted by FASHIONmode News at 7:40 PM