Beyonce Knowles has partnered with H&M for summer. The singer stars in the Swedish retailer's new campaign, modelling pieces inspired by her individual style. The singer also gave "personal input on the pieces seen in the campaign", confirmed a representative for the brand.

The print and billboard images - which see her reclining on beach sun lounger and posing in swimwear by the sea - were shot by Inez van Lamsweerde and Vinoodh Matadin in the Bahamas earlier this year. The adverts will introduce the star: "Beyoncé as Mrs Carter in H&M" - tying in with the name of her upcoming world tour. 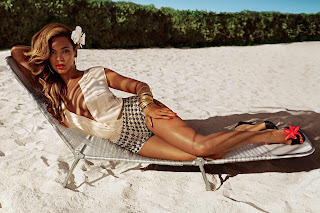 "I've always liked H&M's focus on fun affordable fashion. I really loved the concept we collaborated on to explore the different emotions of women represented by the four elements - fire, water, earth and wind," said Knowles. "It was a beautiful shoot on a tropical island. It felt more like making a video than a commercial."

The summer campaign features swimwear and beachwear pieces - including a bikini from the H&M for Water collection, which raises money for WaterAid. The print adverts will launch alongside an accompanying television commercial - featuring a new Beyoncé song,Standing On The Sun.

"H&M's summer campaign starring Beyoncé is an epic fantasy, with glamour, drama and also a sense of paradise," said Donald Schneider, H&M's creative director. "It was amazing to watch her on the shoot make it all look effortless - a quality that makes her such an icon for women around the world. The campaign is the essence of Beyoncé, and also the essence of H&M this summer."

It was first reported that the singer would be partnering with H&M back in January - which is when the shoot took place - after one of the star's dancers accidentally revealed the news on Twitter.