GQ´s Designer of the Year : Dolce&Gabbana

The men behind the brand, Dolce&Gabbana received the Designer of the Year award at the 15th edition of GQ Men of the Year in London on Tuesday night.

Dolce&Gabbana’s forward looking, flattering and manly designs have been recognized and loved all over the world. In 2012, GQ have chosen to further honour the relationship and respect they hold for Dolce&Gabbana by awarding them the accolade of Designer of the Year. 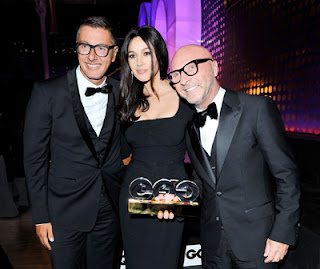 The designers were presented the coveted award by their close friend Monica Bellucci, who wore a classic Dolce&Gabbana black lace gown for the occasion. Bianca Brandolini D’Adda, Kylie Minogue, David Gandy and Ashley Cole all turned up in force to celebrate with Domenico and Stefano.

The GQ Men of the Year awards are in their 15th year and celebrate the achievement of significant men in a vast choice of industries, from cinema to music, comedy and cooking.