Stunning supermodel Candice Swanepoel is at the centre of a shoe storm. 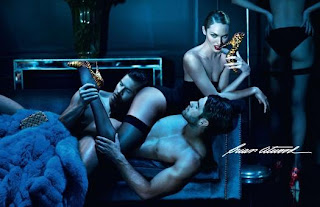 One shows the leggy model holding biting the heel of a tiger-print shoe while two hot male models stroke her leg.

A scantily-clad female model can be seen in the background.

But it's all eyes on Candice, and in another she sits astride a model sporting thigh high boots and bright red lipstick. 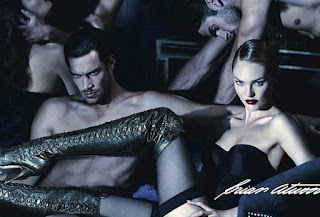 One shows the South African stunner relaxing on a sofa as a model bends at her feet, carressing her shoe. 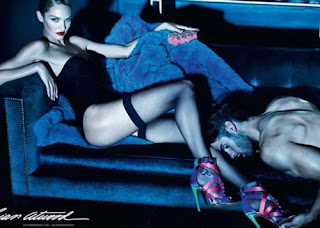 The campaign is thought to be so racy it won’t even appear on billboards outside Atwood’s new boutique at 655 Madison Avenue in Manhattan’s Midtown.

Candice – who defends the red-hot advertising campaign – admitted she understood why they were banned.

She said: “I respect that they banned it. Not everybody is comfortable with their sexuality and with showing your body.

“For me it’s not a problem. I’m proud of my body. I work hard for my body.

"As long as it’s always done in a tasteful way, which it was.”

Candice, 23, is one of the world’s ten highest-paid models.

She has been modelling for Victoria’s Secret since 2007 and has been dating male model Hermann Nicoli for six years.

A film version of the ad, which was due to air on screens in New York taxis, has also been banned.

The large-scale campaign is a first for the designer, whose shoes are loved by stars including Victoria Beckham, Kate Hudson and Rachel Weisz.

Shot by top fashion photography duo Mert Alas and Marcus Piggott, it makes its debut this month in the September issues of Vogue, W, V Magazine and CR Fashion Book.

With all the fuss about the ads, you'd be forgiven for forgetting about the shoes themselves.

But designer Atwood is on hand to explain that with his footwear it’s all about the ankle.

“There is something so sexy about this part on a woman, and these shoes celebrate that,” he said.

Posted by FASHIONmode News at 5:10 PM