In front of gathered media and press from the globe, tire maker Pirelli unveiled its famed Pirelli calendar 2012 at Gustavino's this morning in New York City. With vaulted halls and the 59th Street Bridge up above as fitting backdrops,Pirelli Group CEO Marco Tronchetti Provera introduced “Swoon”, the pictorial theme for Pirelli Calendar 2012 by photographer Mario Sorrenti. Best known for his nude images for fashion magazines such as Vogue and Harper’s Bazaar, Sorrenti’s exploration of human beauty is one of lifelong quest, which led him from his hometown of Naples to world of fashion in New York via London when he was just a teen. At only 21, Sorrenti garnered much accolades when he created the campaign for Calvin Klein Obsession  fragrance with the one and only Kate Moss. During those fast time, Sorrenti became confidant to other up and coming models, like Milla Jovovich, who joked that she would only get naked in front of Sorrenti. 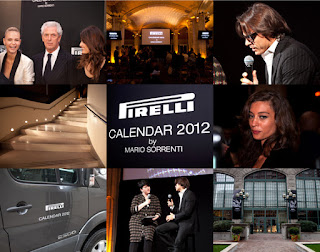 Shot on the transformative landscape of Corsica, PIRELLI Calendar 2012 includes veterans such as Kate Moss, Milla Jovovich, and Lara Stone, as well as Margareth Made of Italy and Japan’s Rinko Kikuchi, both new to the process. The calendar also marks two important milestones – the first official unveiling in New York City and the first Italian photographer. Because of its exclusive nature, the calendar will only be available to VIPs of PIRELLI.
Posted by FASHIONmode News at 3:14 PM