John Galliano, the fashion designer, has been suspended from Christian Dior following his arrest for allegedly making anti-Semitic remarks towards a couple at a Paris cafe.

The fashion house said he would be asked to stay away from work pending the outcome of the police investigation, raising doubts over the Christian Dior fashion show planned for March 4.

The 50-year-old was arrested in the French capital's Marais district, which has always been the traditional home of the city's Jewish community.

He is believed to have been drinking heavily in a local bar on Thursday evening when he launched the alleged attack.

Witnesses called police during the incident, which took place in front of dozens of astonished revellers in a busy covered terrace.

A police source said: 'We arrived extremely quickly and managed to break up the disturbance. The man involved was briefly arrested and then released pending charges for assault.

'Witnesses said he swore heavily, using anti-Jewish insults, before attacking a couple. Both have provided witness statements, as have a number of other people at the bar, including staff.'

The source confirmed that Galliano, who has been chief designer at Christian Dior since 1996, was the only person arrested in connection with the incident.

Galliano, who was born in Gibraltar and then brought up in South London, is often seen in the bars and café of the Marais.

Galliano, who regularly performs his trademark 'rock star' poses at the end of fashion shows, is one of the world's foremost celebrity designers.

Close personal friends include pop star Kylie Minogue, for whom he has designed clothes for tours. Madonna has also visited him regularly in Paris.

His 'set' in the French capital has also included supermodels like Kate Moss, Helena Christensen and Naomi Campbell.

They are always so enthused by his creations that, it has been claimed, they regularly waive their usual couture appearance fees to appear in his clothes.

A friend of the designer in Paris said: 'Women love John because he has a very feminine side. Reports of this assault are so out of character. I've never seen him being violent towards anyone.' 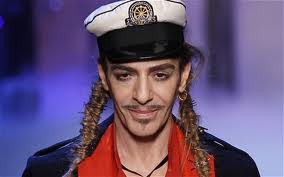 Posted by FASHIONmode News at 4:39 PM