Tommy Hilfiger and Zendaya are taking over the Apollo Theatre in Harlem for their second runway outing together. The designer and actor will stage the autumn/winter 2019 see-now-buy-now Tommy x Zendaya collection on September 8 as part of New York Fashion Week.

The experiential catwalk presentation marks the first time Tommy Hilfiger has returned to New York since he took the #TommyNow concept on tour during the autumn/winter 2016 season. The brand has made pitstops in Paris, Shanghai, Milan, London and Los Angeles, with each show production as blockbuster as the last. During Gigi Hadid’s two-year, four-collection tenure, sets included a “rock circus” in Camden and a “Tommy pier” on Venice Beach. Not to mention, the futuristic scenescape in Shanghai, when Hailey Bieber and Winnie Harlow temporarily stepped in as #TommyNow ambassadors for autumn/winter 2018.

Why Harlem? “Zendaya’s desire to bring #TommyNow [there] felt like an amazing next step in expressing her vision for the future,” says Hilfiger. “Her statement-making point of view in everything she does is what makes her such an inspiring collaborator – it is an honour to continue to provide her with a platform in the fashion industry to share this.” 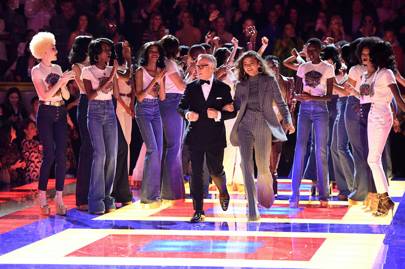 Zendaya’s debut spring/summer 2019 show, which paid homage to the strong women of America’s Seventies-era pop culture, was staged at the Théâtre des Champs Elysées. The foyer was transformed into an arcade with Pac-Man and pinball machines, while guests in the auditorium were entertained by roller skaters twirling to disco tunes in flares and sequinned boob tubes. Oh, and Grace Jones and Pat Cleveland danced down the runway.

Although few details of the autumn/winter 2019 event have been released, the collection takes its cue from the legendary women who have graced the Apollo Theatre’s stage, from Aretha Franklin and Ella Fitzgerald to The Supremes. The duo will “reimagine era-defining power dressing with a bold modern edge,” according to the label. Expect Hadid’s inner circle of models (Bella and Anwar Hadid will of course represent) walking and much fanfare. We can only hope for power ballads on the playlist.

Posted by FASHIONmode News at 5:40 PM