Marc Jacobs On His Fashion Legacy: “I Never Thought Of Myself As Cool”

When Tim Blanks meets Marc Jacobs in April ahead of his wedding to Charly Defrancesco, the designer is in a reflective mood. His friend Grace Coddington has just published a coffee-table book, Marc Jacobs Illustrated, full of her drawings of the designer’s 30 years in fashion. He has also just photographed his new beauty campaign with Lila Grace Moss, whose mother Kate Moss, has been a key player in his story. But, Jacobs insists, he’s not nostalgic.

The conversation spans the breadth of Jacobs’s career, from his beginnings at Perry Ellis, to Louis Vuitton and the evolution of his eponymous brand, all the while reflecting on his place in the world and how the younger generation perceives him. “We [Jacobs and his peers in different fields, including Juergen Teller and John Currin] are still here, but how do you communicate with this whole other young group?” he asks Blanks. “Who are they listening to? If the people they’re listening to have no interest in history, then that matters to me. I can’t fake being of this moment. 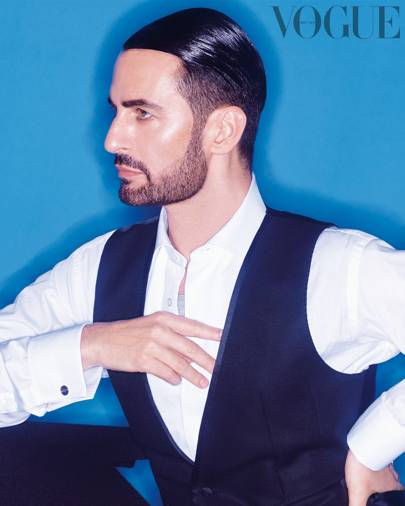 As a person who operated on instinct and whim and emotional desire and need, I can’t suddenly become the person somebody wants. I can only continue being me, and me in this moment has 30 years of baggage – or history, whichever way you want to look at it. I see the world differently because of my experiences. This is just logic.”

His vibrant creativity jars with the digital environment in which his newer audience is immersed. “I don’t know that this data I’ve gathered about how young people communicate has really changed the way I design a backpack or an evening dress,” he says. “I still want to do it by hand. I’m still not really interested in 3D printing. My curiosity about technology has remained something that’s interesting for me to watch in a Netflix documentary.”

Posted by FASHIONmode News at 8:55 AM