The Boozy Evolution Of The Cocktail Dress

Welcome to Fashion History Lesson, in which we dive deep into the origin and evolution of the fashion industry's most influential and omnipresent businesses, icons, trends and more.

The term often evokes smoky lounges or elegant soirées, but what, exactly, is a cocktail dress? By standard definition, a cocktail dress is a "short dress that is suitable for formal occasions." Or, as actress Jean Arthur explains in the 1936 film "The Ex-Mrs. Bradford," it's "something to spill cocktails on." From its inception, the cocktail dress has not been defined by any particular silhouette, color, fabric or style, but one thing remains consistent: it's a woman's go-to garment for occasions that call for a bit of formality while also letting us be free to let loose.

Of course, this type of dress would have never existed without the popularity of cocktails, which first became part of the American lexicon in 1803. The boozy concoctions became increasingly popular on menus in America and Europe throughout the 1800s, but no respectable Victorian woman would have been caught dead sipping them in public, and they certainly wouldn’t wear a dress named after the sinful habit. Fortunately, it became (somewhat) more acceptable for ladies to indulge in a few mixed drinks by the 1910s, and cocktail culture truly began to take off after the end of the First World War. Soon, the cocktail dress became the preferred look for pre-dinner revelry, making it one of the hardest-partying pieces in fashion history. 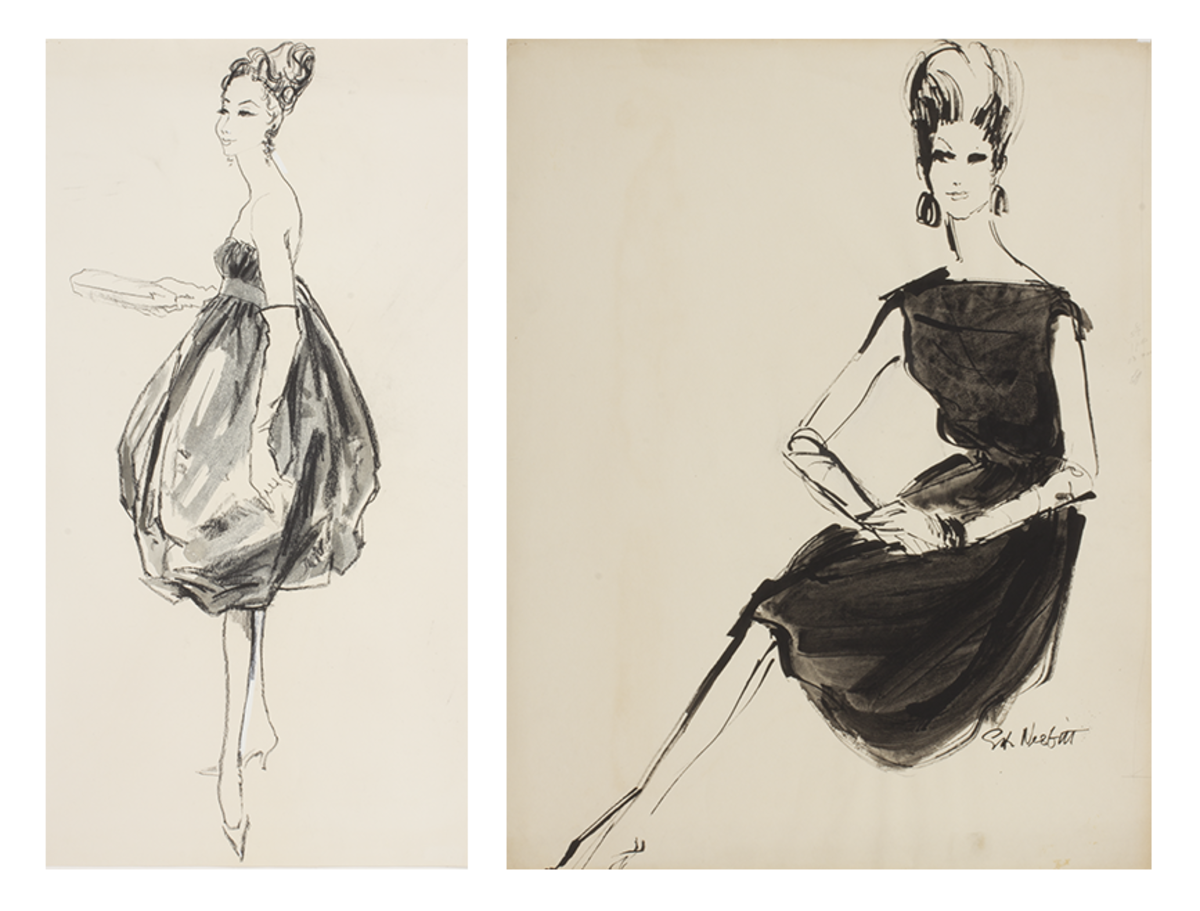 Although not every woman was bold enough to wear short skirts and bob her hair during the 1920s, the decade is often marked as the era of the flapper. Equipped with greater amounts of independence, young women rebelled against the older generations by going to clubs, dancing the Charleston and smoking cigarettes with a cocktail in hand. According to fashion historian Elyssa Schram Da Cruz, this new type of "Drinking Woman" was seen at "private cocktail soirées and lounges, and the cocktail dress, as a short evening sheath with matching hat, shoes and gloves was designated to accompany her." Like the modern happy hour, the cocktail hour usually took place between 6 and 8 eight p.m., making the cocktail dress a necessary factor in a woman's transition between day and night. Because of that, cocktail attire became synonymous with flexibility and functionality, allowing women to look not-too sophisticated during the day and not-too casual in the early evening. For years, the main selling point of cocktail ensembles was "practicality." Often times, the only difference between a stylish day ensemble and cocktail outfit was a change in accessories, hence the popularity of the cocktail hat and other coordinating pieces.

America's prohibition, which banned the sale of alcohol between 1920 and 1933, made the concept of a cocktail dress seem a bit naughty, despite the fact that millions of people continued to drink regularly. During this time, illegal speakeasies popped up across the country to serve cheap bootleg liquor to the masses while the upper classes threw at-home drinking parties using the copious amounts of liquor that they stockpiled before the ban. Wealthy bon vivants also eased the pains of prohibition by taking indulgent trips to London, Paris and Cuba, bringing new aspects of global cocktail culture back into their stateside homes. Soon, the popularity of intimate, boozy gatherings increased the need for cocktail attire that met the needs of elegant party animals while also being less formal than their other nightly attire. 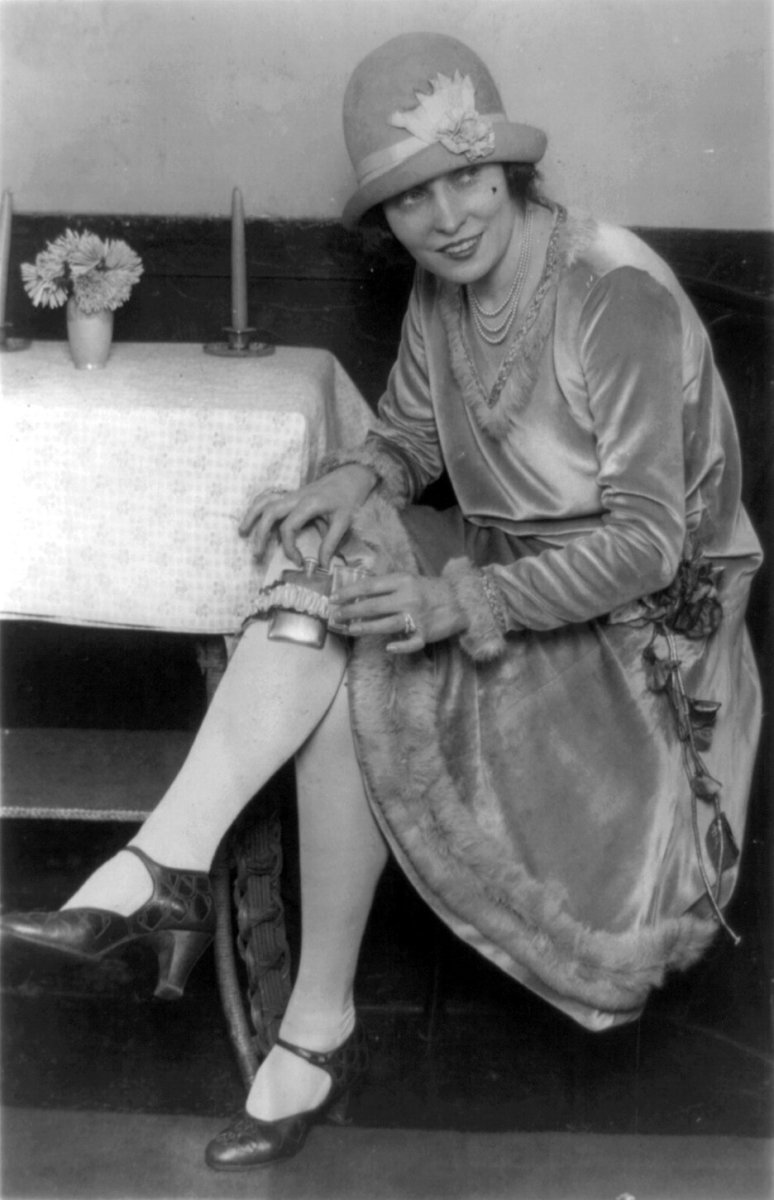 The first direct mention of a cocktail dress in Vogue was in the May 15, 1927 issue, referencing a Patou dress in "mannish tweed", but the term was used more frequently in the 1930s. An article from 1930 in The New York Times explains that the cocktail dress was better-known by a number of different names such as the "late afternoon frock," which was "far more closely related to the evening mode than to the afternoon mode as it used to be before acute romanticism set in". A year later, the October 1931 issue of Harper's Bazaar sang the praises of the relatively new type of garment, dubbing the cocktail dress "avowedly modern."

The American stock market crash of 1929 and the preceding economic depression completely altered the carefree nature of the flapper era, and fashions echoed the social change. Cocktail dresses followed the same slim, bias-cut, ankle-length styles that dominated female fashion of the 1930s and replaced the cylindrical, short styles that fit the mood of the flappers. Although one would assume that the economic hardships would put a damper on cocktail culture, there was still plenty of drinking going on (especially after prohibition), which made the practicality of the cocktail dress even more important. 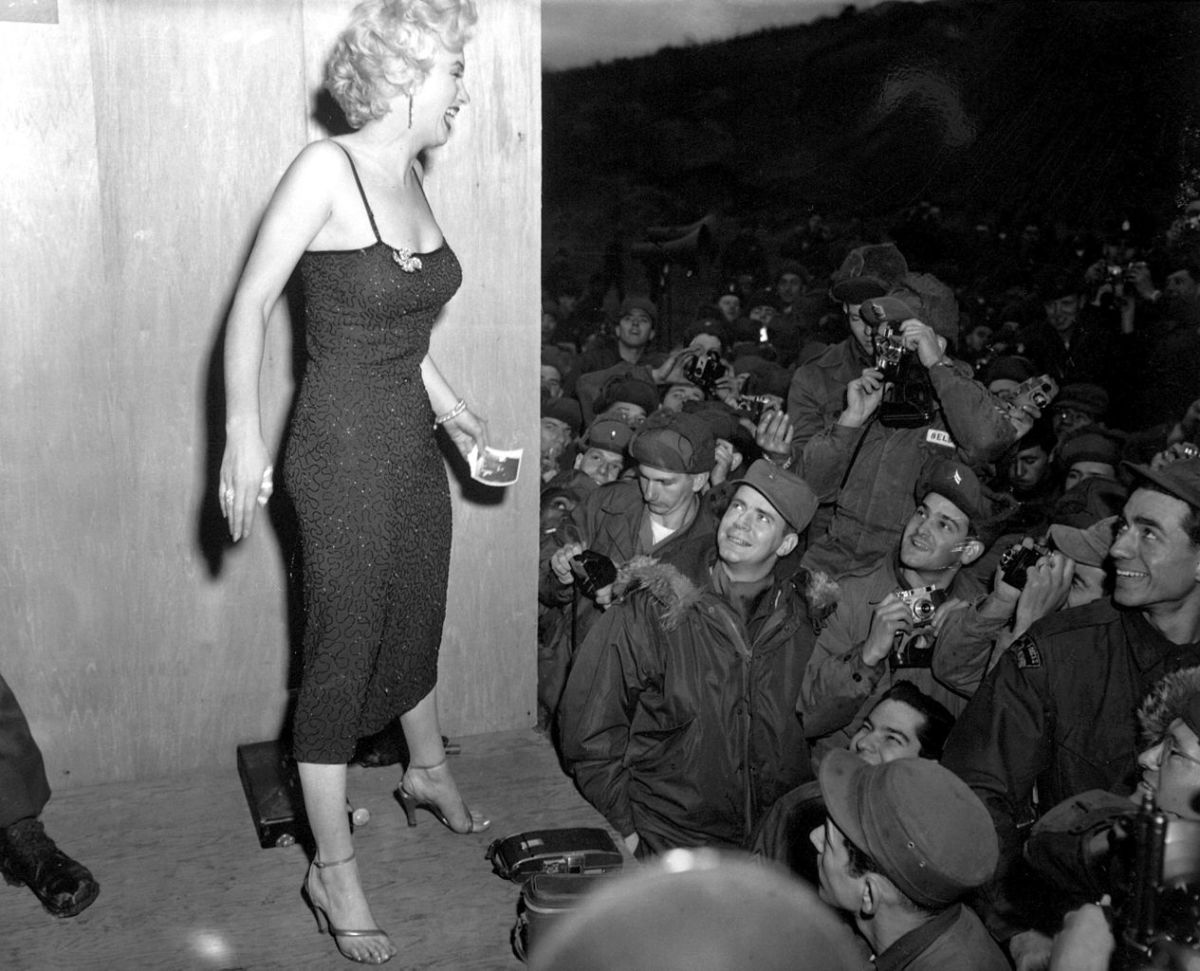 The devastating effects of World War II had an obvious effect on cocktail dressing, but once the war was over, a surge in the popularity of at-home cocktail parties gave the cocktail dress a whole new life. Women's clothing in the Western world at this time was highly influenced by Christian Dior's "New Look" collection of 1947, which made cinched waists and full skirts the ubiquitous silhouette for formal dressing, along with the form-hugging sheath dresses popularized in films by the likes of Marilyn Monroe. Dior famously dubbed one of his early evening frocks a "cocktail dress," leading to a rise in the use and concept of cocktail dressing by the end of the 1940s. This terminology was also a sly marketing technique used to attract booze-loving American customers who enjoyed hosting and dressing for cocktail hours. After all, in his 1957 autobiography "Christian Dior and I," the famed French designer stated the cocktail was the "symbol par excellence of the American way of life." 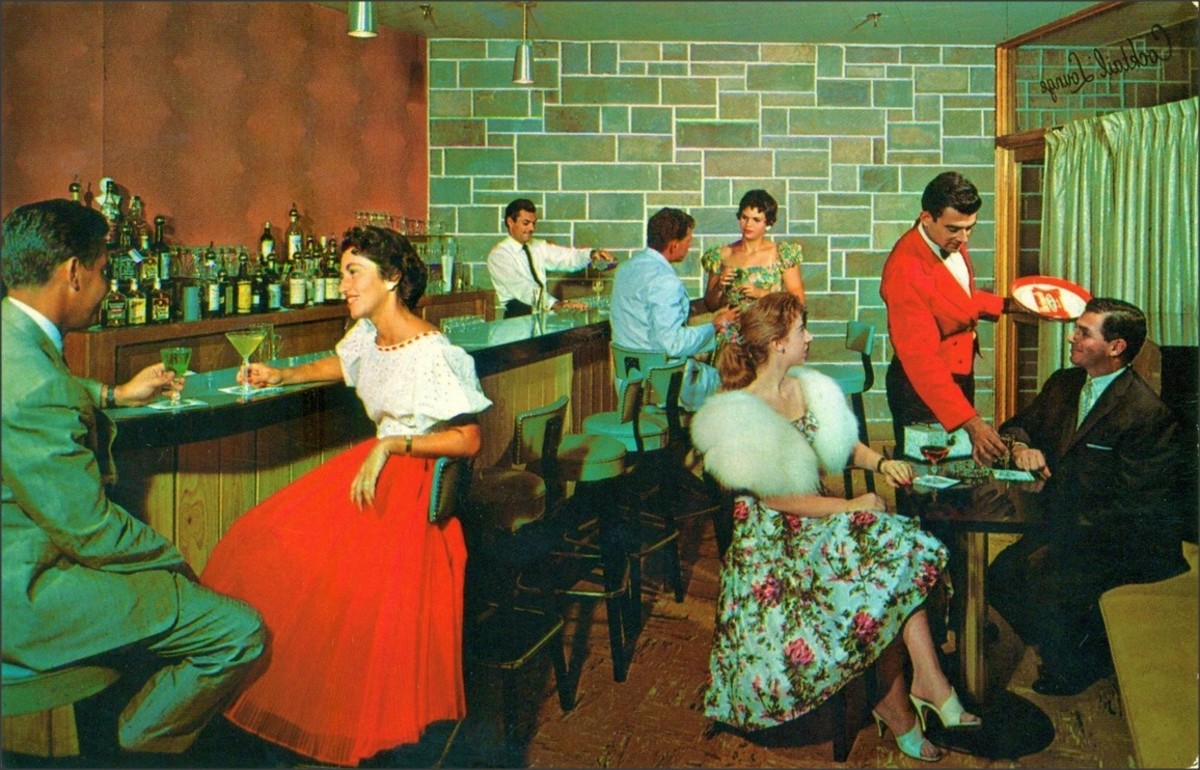 French Fashion Trends Come To The US

The 1950s are perceived by many to be the height or age of the cocktail dress. French couturiers continued to release cocktail-specific dresses in a wide range of colors and styles, and American women were quick to purchase cheaper copies made on Seventh Avenue in order to have their own little piece of high-end cocktail culture. Most importantly, cocktail hour and cocktail parties helped to define the domesticated rolls of women as wives, matrons and hostesses as these types of gatherings had become an integral part of social life between the 1950s and 1960s. Although cocktail engagements were not limited to any level of income or social status, there were rather strict rules of etiquette that were followed by hostesses and guests. The etiquette (and drink recipes) could differ by year and social group, but the short-and-stylish cocktail dress was the one true requirement for any of these get-togethers.

The Decline Of Cocktail Dressing 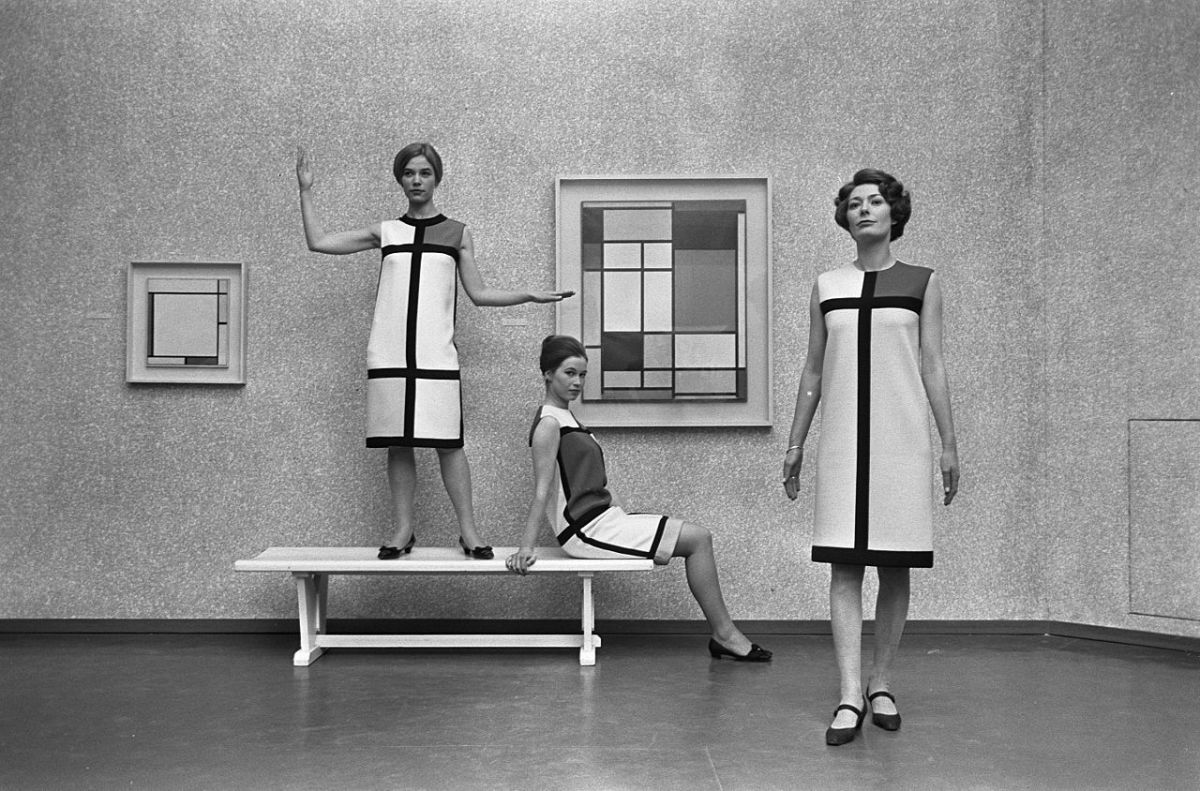 For true cocktail aficionados, the period between the 1970s and 1990s is seen mostly as a low point in the history of drink mixing, and the popularity of hosting semi-formal cocktail affairs slowly disappeared along with the cocktail shakers. By the end of the 1960s, even upper-class women began hosting at-home drinking soirées in palazzo pants and jumpsuits, and the idea of the cocktail dress became more of a style than type of occasion wear. From Yves Saint Laurent's mid-60's 'Mondrian' dress to the slinky slip dresses worn by cosmo-sipping Carrie Bradshaw in the late 90's, designers never stopped producing so-called "cocktail dresses," whether or not they were intended or used to fit that purpose.

Enter the 2000s, perceived by many to be the renaissance of cocktail culture. Of course, this modern "golden age" has more to do with hip bars, creative bartenders and innovative concoctions than parties and dressing. For the most part, the days of cocktail etiquette, along with the semi-formal dressing standards, are long gone. Today, a cocktail party is more likely to be a come-as-you-are affair, and cocktail dresses are found only at weddings, holiday parties and exclusive fashion and entertainment industry events.

Although the cocktail dress was originally intended to give women an informal and practical dressing option, it's now one of the most formal items in the closets of many modern women, not limited to any sort of time or social function. Considering this, the cocktail dress is an outdated concept, but that doesn't mean it's off limits. So, cheers to the cocktail dress! It's kept women looking good while sipping booze for almost a century, and will continue to do so for decades to come.

Posted by FASHIONmode News at 4:42 PM