Taking place a good three months before fashion’s traveling circus rolls through New York, London, Milan and Paris, Paris Couture Week serves as a crystal ball to peer into some of the trends we can expect later in the year. Though “couture” isn’t usually synonymous with “trendy” – these clothes are one-of-a kind and bespoke — it doesn’t mean we can’t smuggle some of the ideas into our own wardrobes. Behold, the top five trends from the Fall 2019 couture collections. 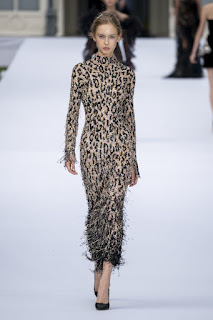 Though leopard print has become so omnipresent in the past few seasons it can barely be considered a “trend” anymore — remember when Jenna Lyons said “leopard is a neutral?” — many shows went further, bringing in inspiration from the wider animal kingdom. Though there were the classic big cat prints at Ralph & Russo and Dundas, Redemption leaned heavily into the under-utilised giraffe print and Armine Ohanyan went even further afield with aposematism-inspired moth prints and spindly spider webs. Here’s to getting wild in a more unexpected way. 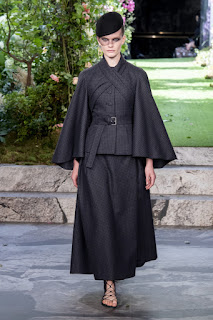 Just last week, we predicted wrap dresses would be the silhouette of the summer –now it seems the style will transport itself well into fall. Wraps both breezy and structured made an appearance on the couture runways at Ralph & Russo, Dundas, Dior and Elie Saab. They’re the perfect way to project pretty while still maintaining comfort. 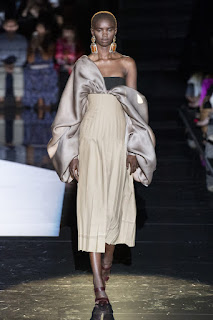 An abundance of flowy fabrics has been enveloping frames for a number of seasons now, and based on couture week the trend does not seem to be abating. Anne Shirley-style puffed sleeves made an appearance at Josse while the ones at Chanel and Ralph & Russo were more 19thC. Gibson Girl. Looks like the Michelin Man’s inflated proportions will continue to hover in the spotlight well into 2020. 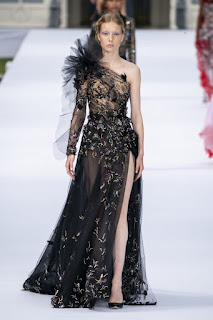 Kim Kardashian’s tiny waist and bubble butt may symbolize the desirable body du jour, but if couture is any indication, the delicate shoulder is ready to get its due. Chanel, Ralph & Russo and Elie Saab all showed asymmetrical gowns that exposed a single delicate shoulder, while Armani Privé went strapless to bare full décolletage. Shoulders, your time is now. 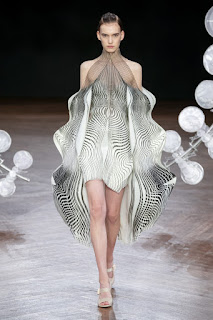 Many of the prints that appeared at couture week bore a strong resemblance to the mind-bending op art paintings of Bridget Riley. Iris van Herpen’s kinetic waves were positively hypnotic, as were the warped spots and stripes at Jean Paul Gaultier. Chanel channelled the groovy 1960s with a cobalt zig-zag pattern. It was all totally tubular, man.

Posted by FASHIONmode News at 9:27 AM