Until now, Christine Centenera and Josh Goot’s Wardrobe.NYCcapsule collections have only been sold in four- and eight-piece wardrobe sets through the brand’s website and New York concept store. Matchesfashion.com buying director Natalie Kingham, however, has persuaded the pair to sell their luxury everyday staples as individual pieces on the e-tail platform.

“The concept of Wardrobe.NYC, as a brand that was designed in capsules to build the perfect wardrobe, was something that we found incredibly innovative,” Kingham told Vogue. “We have been great admirers of how the brand has used content, experiential retail and word of mouth to build a loyal base as a direct-to-consumer business and are excited to be partnering as its first retailer.”

The Matchesfashion.com edit features Wardrobe.NYC’s 04 Denim line, which was launched in collaboration with Levi’s and already counts Gigi Hadid as a fan, and select items from the 01 Tailored, 02 Sport and 03 Street capsules. “There’s been a lot of interest in our individual pieces, and we’ve always designed each release to relate to the next,” says Centenera of the partnership, which will allow customers to mix and match looks for the first time. “Due to the classic, minimal design, our pieces work separately or together, and can be styled across releases.” 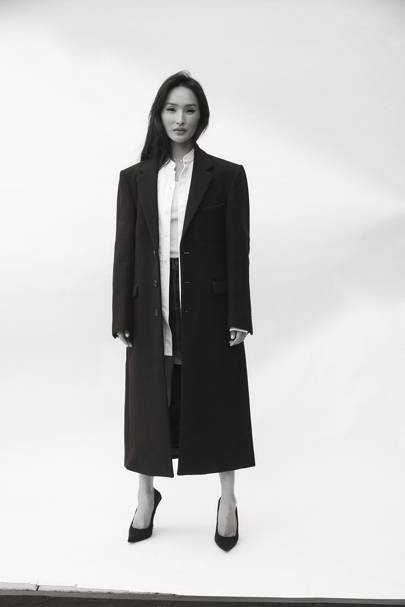 When Goot, an Australian designer, and Centenera, Vogue Australia’s fashion director and styling collaborator of Virgil Abloh, founded Wardrobe.NYC in 2017, their proposition was simple: To produce timeless micro collections that worked cohesively and could be worn season after season. Of course, the idea of capsules has been around for aeons, but no one had packaged it in such concise (and stylish) units. Think shirting, cotton basics, sharply-cut yet over-sized outerwear and easy, go-with-anything denim. With the fashion industry backing them, Wardrobe.NYC, and its anti-consumption tagline, cut through the noise during a time when sustainability was becoming a serious issue no longer swept under the carpet.

Signing to a major online sales platform that ships all over the globe is a “significant evolution” for the young business, says Goot. But Wardrobe.NYC will be aligned with part of its Innovators programme, which champions brands who have built their businesses around straight-to-customer models.

During a time when ubiquitous high-street dresses are going viral, reiterating the value of investment buys couldn’t be more important. Browse the collection, which is priced from £90-£1,500, at Matchesfashion.com now, and 5 Carlos Place until July 31st.

Posted by FASHIONmode News at 9:31 AM