“Luxury Is To Be Free,” Says Alber Elbaz Of His New Tod’s Collaboration

Since Alber Elbaz departed Lanvin in 2015, his presence has been sorely missed by an industry that held him in great esteem. But, he explains over a coffee in Palais de Tokyo, the past few years have afforded him the opportunity “to look at things from a different angle, not to have this daily stress – to do things only when I want to, and with whomever I want to”. That liberty has now materialised through a collaboration with Tod’s which champions the happiness he has found as a free agent: a collection of shoes and leather goods conceived with creativity rather than commerce at the fore. “Is there a place for intuition?” he asks, “Or is it all about focus groups? When you do focus groups, they are based on yesterday, not tomorrow.” Accordingly, he chose intuition.

That intuition prompted Elbaz to embark upon his new project with a series of charming illustrations that depict what it means to be happy: “happy to be free” writ alongside a picture of a leaping woman; “happy family” beneath a sketch of grandmothers, cousins and children. It’s that sense of liberation that has informed the pieces: a range of shoes in gleeful, shimmering metallics, neoprene handbags and driving shoes mounted on sneaker soles. “I don’t have a driving licence,” Elbaz shrugs “but maybe the shoe is the new car. I don’t want to change the soul of Tod’s, but change the sole itself.” 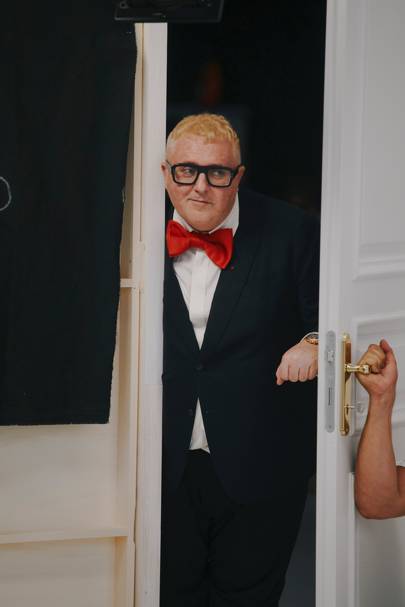 Marking the second iteration of Tod's “Factory” initiative, which sees the brand inviting creatives to reimagine its DNA through capsule collections (the first, with Alessandro Dell'Acqua, showcased a “nonchalant glamour”), Elbaz's project highlights the fact that even the most storied houses are now opening their doors to reinterpretation. The illustrations that serve as the collection’s starting point showcase how Elbaz thought of the happiest moments in people’s lives and how Tod’s might figure within them: a wedding day where couple might both wear flats rather than “all the brides who wear 10-inch platforms to be tall, but then can’t even move”.

“It was a result of my observations in the street,” he continues of the resolute practicality of his range. “I looked at women and what they need, what they want and how can we mix the dream with the reality... Luxury is to be free.” He is proving that point – and if buying into the range imbues its wearers with even a fraction of his approach to the world, it will be money well spent.

Posted by FASHIONmode News at 8:52 AM