The Outerwear You Never Knew You Needed: A Couture-Grade Denim Jacket

At 29 years old, Augustin Dol-Maillot has an incredibly impressive CV. Having started at Chanel as an intern when he was just 16 years old (he’d spend his summer holidays in the ateliers, “just watching, learning”), by his mid-20s Karl Lagerfeld had appointed him part of the print and sportswear studios, which oversee everything from trainers and T-shirts to “the weird stuff like the surf boards,” he says, “and every print in every collection.” Then, early last year, his CEO called him into his office and told him: “Now, you have to do Barrie.” “I think it must have been Karl who recommended me,” Dol-Maillot reflects. “So, I did it. I would never have thought of it, but now I love it.” 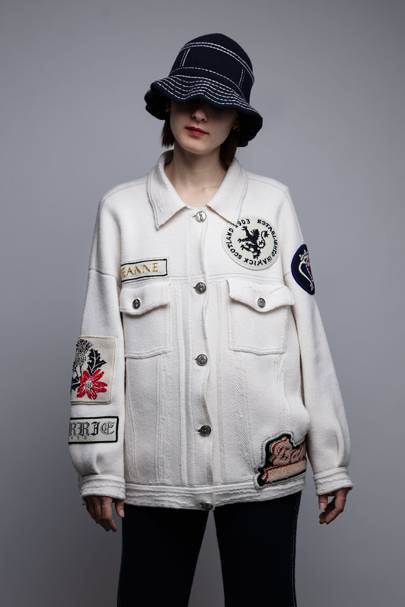 A year into being appointed artistic director of the heritage Scottish knitwear brand (which Chanel acquired in 2012), and Dol-Maillot is clearly settling in. Marrying the savoir-faire of Chanel’s myriad métiers with the best cashmere and the tastes of his generation, he is bringing his fresh vision to the long-beloved house – most directly exemplified through his latest creation, an adaptation of a denim varsity jacket knitted in cashmere and covered in Lesage-embroidered patches. “At Chanel, I used to work in the sporty things… and I thought it was funny to do the trompe l’oeil,” he smiles of elevating the humble denim jacket into couture terrain. “I think we’re going to do more of that, finding more things to do in knitwear that you wouldn’t expect.”

With each patch – Scottish thistles, borders, lions – taking tens of hours to hand-embroider with minute beads and tiny sequins, and the cashmere knit indisputably the best in the world, his is a rarefied alternative to a battered basic, and indicates the direction he plans to evolve the brand. At Selfridges this week, alongside the Barrie boutiques in Paris and London, you can choose the placement of your patches, request your name stitched wherever you please, and watch one of Lesage’s petites mains finish your piece for you. When I laugh that, if there’s anything fashion loves right now, it’s luxury sportswear and DIY customisation, Dol-Maillot grins, “I’m 29…” Clearly if anyone can inject Barrie’s storied heritage with new energy, it’s him.

Posted by FASHIONmode News at 9:22 AM