Marques Almeida Step Outside The System With AW19 Concept Show

It takes a certain confidence to take your brand off-schedule, to show on a sunny mid-week afternoon when you're more likely to receive an out of office than a ticket request. But Marques'Almeida has always had that strong sense of self, making decisions based on what's right for their brand, rather than what fits the system.

Casting for today's autumn/winter 2019 show came courtesy of an open call that happened in June, as well as friends of the brand that have taken to its catwalk before. The result was a disctinctly young group of people who could have bunked off art school, jumped in the car that sat front and centre of the set, and headed off to the future decked in top-to-toe looks.

If they weren't clambering over the car, then the cast - whom it was often difficult to decipher from the stylised loyalists that had come to compile shopping lists - were lying languid in a cloud-like pile-up of mattresses or raving amongst a heavy layer of dry ice. This off-schedule opportunity proved a chance to flaunt how the clothes sit, move and flourish in situ.

The clothes themselves were distinctly Marques'Almeida. The frayed denim we've come to know and love of this husband-wife duo was there, this time in polite car coats and a top-to-toe look straight from the '00s. 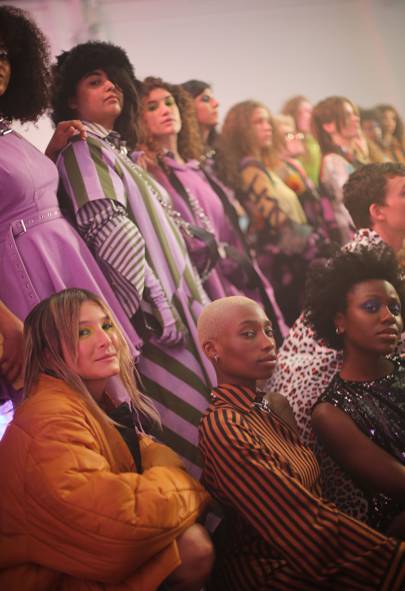 While denim took a side seat, lime was an omnipresence. Often paired with a vivid lilac, this difficult colour palette was there to be revisited in pieces from padded jackets to slip dresses, the silhouette remaining fluid and oversized all the while. Menswear looks were introduced, but felt as nuanced with the womenswear to easily interchange across.

It wouldn't be a fashion show in 2019 if there wasn't a thought given to content creation. This time, it was less about the onlookers and more about those that were there to be seen, offering a new perspective of the show as their live imagery was broadcast across the warehouse spaces's blank white walls.

Stepping way from the "constrained" structure of fashion week, here, Marques' Almeida have proved that finding yourself when you moving away from the norm is nothing to be sniffed at.

Posted by FASHIONmode News at 9:37 AM