Will Opening Runway Shows To The Public Be A Game Changer For Fashion Week?

Agreat fashion show is truly unforgettable. Months of preparation and anticipation culminate in a crescendo of theatricality and glamour that lasts just a few minutes but sets the tone for the new season and ignites the fashion mechanics of desire, imagery and aspiration. Fashion shows can elicit tears of joy (as seen at Valentino’s most recent couture spectacle) or ignite a wider cultural conversation about sex, gender and politics (Alexander McQueen’s shows always hit a cultural nerve). But for decades these shows have been reserved for industry professionals and VIPs, fiercely guarded by clipboard-wielding publicists and a phalanx of security guards. Until now, that is.

Last week the British Fashion Council announced that tickets for a selection of shows at London Fashion Week will go on sale to the public, with prices starting at £135 and going up to £245 for front row tickets. It’s the first of the “Big Four” fashion weeks to make the move. The participating designers are yet to be confirmed, but the tickets also include access to installations, panel discussions and the DiscoveryLAB, “an experiential space where fashion meets art, technology and music”. The news comes as brands are becoming ever more public-facing – whether it’s offering in-store experiences with designers, bespoke personalisation or speaking directly to customers via social media – and fashion exhibitions at museums are breaking records.

Fashion shows, however, still remain the most visceral experience of the medium. Over time, the purpose of them has evolved from vehicles for stores to place orders and press to orchestrate publicity to monolithic marketing spectacles, designed to communicate brand identity and showcase famous ambassadors. Celebrities now sit alongside influential editors, department store merchants, corporate sponsors, influencers and tech tycoons. The sets vary from nondescript white rooms and derelict factories to the far more extravagant: private beaches in Malibu, exotic palaces or the gilded Louis XV salons of Paris. 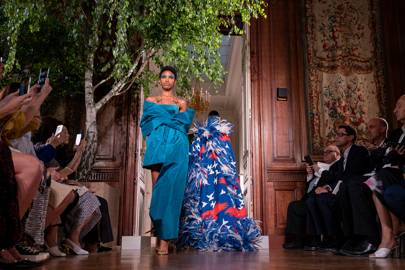 One thing is certain: despite them being live-streamed into the digital stratosphere and Instagrammed by every member of the audience, nothing quite compares to being there in person. Hence why there’s such a piqued interest in attending.

How have fashion shows evolved over the last decade?

In the last decade, fashion has morphed into an entertainment industry and as a result fashion shows are more akin to music concerts or sporting events than ever before. In 2016, Kanye West staged a fashion-meets-music Yeezy show at Madison Square Garden in New York, with over 20,000 people in the audience and 12,000 models. Tickets went on sale to the public and alongside his third Yeezy collection, West also debuted his new album.

In June 2018, West’s protégée Virgil Abloh invited thousands of art students to his debut Louis Vuitton menswear show. Prior to that, in 2016, he posted the invitation to his Off-White show on his Instagram account: “The address and time are here for all the kids to come,” he wrote. Except many of them were denied entry due to capacity limitations. Samuel Ross of A-Cold-Wall also opened up his show to the public, allowing them to register on the label’s website for tickets in the hope of welcoming young people who are usually shut out of the industry.

In May, a new fashion and art festival, Reference Berlin, held in an abandoned car park in the German capital, opened to the public. It brought together fashion names such as Martine Rose, Comme des Garçons, Alyx and Michel Gaubert with the likes of curator Hans Ulrich Obrist and Big Love Records founder Haruka Hirata. Some 2,300 people attended after applying for admission-free accreditation. “It was a great opportunity to decontextualise what [fashion brands] do, and for them to come up with something that has a different space – to talk about a vision and experiment,” says Mumi Haiti, the founding CEO of Reference, who encouraged designers to collaborate with artists on installations, panel discussions, video projects and live experiences. “Everyone who dared to participate, the feedback was amazing,” adds Tim Neugebauer, the festival’s head of communications. “Taking away the privilege contributed to creative content because it had to be more creative to make people come back.”

What are the benefits of public-facing fashion shows?

It raises the question of what the benefits are of opening the floodgates. In Shanghai, emerging talent incubator Labelhood has staged two shows – one for consumers and one for industry insiders – since its inception in 2016. “To buy the clothes is not the priority,” says founder Tasha Liu, who describes the shows as for KOLs (Key Opinion Leaders), as well as COLs (Customer Opinion Leaders). “The first priority is to create a community, the cool kids come and they love the fashion and they share their experience.” Labelhood uses the public-facing show, which is reserved for big spenders and non-industry influencers, to create a demand for its emerging designers, who often can’t compete with the monumental marketing budgets of bigger brands.

“Right now, there is a gap between the brand and the consumer,” adds Liu. “The original function of fashion shows was for placing orders, but now they are big marketing events. So you need to face the consumer. People want to be the first to see those products and the design, not just waiting for it for six months.”

In many cases, that kind of inclusivity doesn’t come cheap. The high ticket prices to London Fashion Week emphasise an exclusive rather than inclusive experience, appealing to those who want to be – and can afford to be – surrounded by industry insiders and celebrities. After all, if the shows were open to the public, there would be less demand (and less profit to be made) from the outsiders aspiring to be on the other side of the velvet rope. As long as exclusivity is a prerequisite to luxury (in some sense, it always will be due to the cost of the products), fashion will remain fortified in order to maintain that aura of magic and mystery, and so elicit aspiration and desire.

How has haute couture remained exclusive while inviting clients to shows?

That said, customers at shows is nothing new. In the world of haute couture, customers (or clients, as they’re referred to) are always invited to the shows and treated to lavish events in Paris. After all, they are the ones spending vast sums on the clothes and jewellery. Cruise shows, held in far-flung locations by the world’s biggest brands, are arguably the hottest ticket. Brands such as Louis Vuitton, Gucci, Dior and Chanel will often bring top clients, celebrities and VIP editors to exotic locales on branded private jets. These shows are more than just a fashion week highlight — they offer the chance for guests to experience a location through the eyes of the brand itself, from cherry-picked hotels and Instagrammable activities to a star-studded show and after-party in a picturesque setting.

The invitation comes at a price — of loyalty and a colossal amount of spending. In fact, many luxury brands have shifted the focus from VIPs to EIPs (Extremely Important People) with the 0.001 per cent taking precedent. No longer will a personal shopper and a glass of champagne in a spacious fitting room cut it. Jewellery house Boucheron offers its EIPs invite-only stays at its private apartment on Place Vendôme, which is serviced by a 24/7 butler from The Ritz next door. Net-a-Porter offers EIPs backstage access at fashion shows, and meet-and-greets with designers and their buyers. This summer, MatchesFashion is taking customers aboard a 1930s yacht as it sails the azure waters of Ischia.

“By making shows more open, the brands have an opportunity to connect with clients – and vice versa – creating a community of appreciation around the collections,” says Ian Grice, Harrods’s head of elite and personal shopping. At the couture shows earlier this month, the Knightsbridge department store arranged for its top customers to attend the shows of its top-selling fashion houses. It also has an invite-only Instagram account for its EIPs, which features the most expensive products and experiences to a core of its customers (again: exclusive inclusivity). The appeal of attending shows, Grice points out, is that they only happen once, making it the ultimate luxury experience akin to a movie premiere or a World Cup final. “The move to more clients at shows makes sense for all. It allows designers to create community around their brand and share an experience, and turns what was previously a one-way relationship into a partnership of sorts, igniting greater loyalty.”

Why is the inclusive vs exclusive balance key?

Inclusivity may be the buzzword on the fashion industry’s lips, but it also presents a paradox if it is reserved for those who seek exclusivity and are able to afford it. As more eyes are on fashion and the public becomes increasingly engaged with the industry’s marquee fashion weeks, the challenge is how to be two things at once: open enough to feel inclusive, closed enough to remain exclusive.