When Paul McCartney hosted a family screening of Yellow Submarine, the 1968 fantasy film inspired by the music of The Beatles, it wasn’t just his grandchildren who were in awe of the psychedelic trip down Abbey Road. McCartney’s daughter, the activist designer Stella, was blown away.

“It affected me in a way I just wasn’t expecting,” McCartney tells Vogue. She found herself removed from her familial ties and inspired as a creative to channel the trippy colours, comedy, lyrics and spirit of togetherness into a capsule collection, aptly entitled “All Together Now”. “It’s shockingly modern to me that these four young guys from Liverpool were championing themes of unity and solidarity,” she continues. “This idea of connecting people has never been more relevant.”

The riotous palette, prints and process continue the narrative McCartney told through her autumn/winter 2019 collection, inspired by the Northern Soul scene of the late 1960s. “I wanted to take the Stella McCartney woman – and the heritage ingrained in me – and pump the whole thing up,” she smiles of the childlike state of wonderment she adopted during the design process. The “Lucy In The Sky With Diamonds” scene in the film, for example, informed dresses with whimsical circus-esque prints; a fur-free jacquard coat pays homage to the band’s marching uniforms, and pop-art portraits of the musicians are realised as patches and motifs on bold womenswear, menswear and kidswear, which McCartney hopes her customers will wear fluidly. 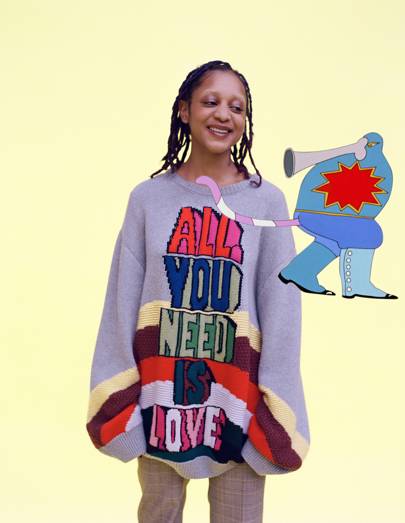 The lyric-driven pieces, such as knitwear and jersey printed with the phrase “All Together Now” in multiple languages, or the separates bearing the words “all you need is love” and “love, love, love”, elaborate on McCartney’s thought process. “There’s so much paraphernalia from The Beatles already on the market,” she says. “The band says no to 99.9 per cent of collaborations, so I wanted to take the lightness of heart into a collection that speaks to yesterday and today – not just replicate their iconography.” The fact her father agreed is a huge compliment for her.

“I started thinking about fashion design from a young age because I was interested in the psychological connection between how you feel and what you wear,” McCartney elaborates. Central to this is the social responsibility McCartney has instilled in her vegetarian brand. “I’m not perfect, by any means, but I’m trying very hard to create a different business model for fashion,” she affirms. “I don’t want to participate in the mass murder of animals and the environmental destruction this creates, outside of the overwhelming waste in the industry.”

As well as organic cottons and yarns used in the capsule, McCartney focused on upcycling vintage patches and fabrics to use. “Designing in a timeless way is key to sustainable fashion, and this is a collectable collaboration you won’t want to throw away.” Nor, she hopes, will you cast aside the message of togetherness. “It’s emotional, authentic and, politically, it has never felt more relevant.”

Posted by FASHIONmode News at 8:59 AM