Not every celebrity couple dreams of magazine covers and big wedding-dress reveals. In fact, for many, keeping their wedding a secret is the ultimate goal. The latest to do so? Heidi Klum, who married musician Tom Kaulitz back in February, just two months after the Tokio Hotel singer proposed, People reports.

The two got engaged last December over the Christmas holiday. They first sparked rumours of a relationship when they were spotted kissing on the set of America’s Got Talent in March of 2018. Some were quick to criticise the couple’s 17 year age gap, and Klum subsequently spoke out in response. “Lately, I’m being reminded more about my age by people other than myself,” Klum told InStyle in July 2018. “My boyfriend is many years younger than me, and lots of people are questioning that and asking about it. That’s really the only time when age seems to be shoved in my face and I have to give an answer for it... I don’t really think about it that much otherwise. You have to just live a happy life without worrying too much about what people think because worrying is only going to give you more wrinkles.”

This marks Klum’s third marriage. Before dating Kaulitz, she was in a three-year relationship with art dealer Vito Schnabel. She was previously married to stylist Ric Pipino from 1997 to 2002 and musician Seal from 2005 to 2014. She and Seal share two sons and a daughter, and he also adopted Klum’s daughter from a previous relationship. 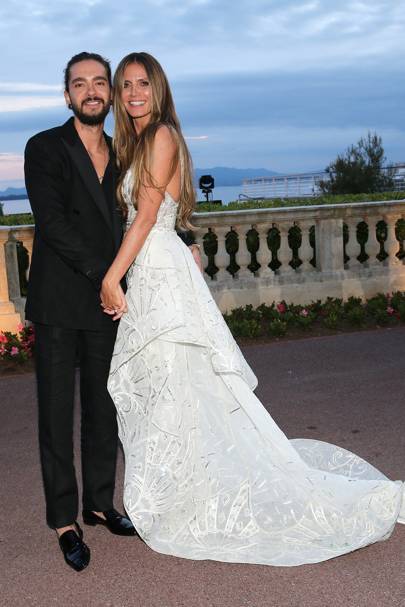 Kaulitz got the blessing from all four children on Christmas Eve morning before proposing with breakfast in bed. When Klum announced the engagement with an Instagram of she and Kaulitz in bed, she captioned the photo with one word: “Bliss.”

Klum and Kaulitz aren’t the only celebrities to choose a secret ceremony. Earlier this year, actress Robin Wright reportedly married Saint Laurent VIP relations manager Clement Giraudet in France. “It was very intimate and low-key,” a source told People. “Robin wanted it to be about them, not a big production.”


Michelle Williams also revealed she married singer-songwriter Phil Elverum in a private ceremony in upstate New York. Amy Schumer, Mary-Kate Olsen, Beyoncé, and Blake Lively and Ryan Reynolds are just some of the other stars who have pulled off the almost impossible feat of getting hitched out of the public eye.

Posted by FASHIONmode News at 3:55 PM