When Grace Jones and Pat Cleveland danced down the runway at the TommyxZendaya spring/summer 2019 show, the message was clear: the Disney Channel graduate and Hollywood darling was raising the bar set by Tommy Hilfiger’s first collaborator: Gigi Hadid.

For her second season with the US clothing giant, Zendaya is taking over the Apollo Theatre in Harlem on 8 September to present her autumn/winter 2019 see-now-buy-now edit. Inspired by the legendary women who have graced the Apollo’s stage, from Aretha Franklin to Ella Fitzgerald and The Supremes, the duo has “reimagined era-defining power dressing with a bold modern edge” – and highlights are already online to browse and wish list.

Building the hype herself, Zendaya has been playing the poster girl for the 1970s-inspired collection in New York. At a Lancôme fragrance launch this week, she wore a black-and-white polka dot dress with an undone pussy-bow. Then, at The Daily Front Row Fashion Media Awards, where her longtime stylist Law Roach was honoured, she premiered a burgundy velvet power suit complete with a matching cap, and another dotty pussy-bow blouse. 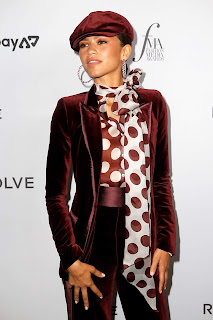 On the night of the presentation, fans will be able to watch the show via a virtual reality e-commerce experience on Uk.tommy.com. Viewers will have real-time backstage, front row and runway access, as well as first dibs in the online pop-up shop, which will sell the pieces as soon as Hilfiger and Zendaya have taken their bows.

For those in New York, a TZH-monogrammed bus with snakeskin interiors will be parked outside the Apollo selling the edit, and providing ample Instagram opportunities. A week later, the double-decker will set up shop outside an as yet undisclosed location to allow passers-by to immerse themselves in the Harlem experience once more.

Now in its sixth season, Hilfiger knows what works for his #TommyNow concept (his means of reaching customers outside of his stores), and he’s pushing it to the extreme. All aboard, TommyxZendaya is rolling into New York Fashion Week in (diva) style.

Posted by FASHIONmode News at 6:17 PM