The West Poland-born, German-raised photographer Peter Lindbergh has died. The news was announced via his official Instagram account, which read: “It is with great sadness that we announce the passing of Peter Lindbergh on 3 September 2019, at the age of 74. He is survived by his wife Petra, his first wife Astrid, his four sons Benjamin, Jérémy, Simon, Joseph and seven grandchildren. He leaves a big void.”

The prolific lensman had a long history with British Vogue, most recently capturing 15 stars for the September 2019 Forces For Change issue, which was guest-edited by HRH The Duchess of Sussex. For the mammoth cover shoot, which took place over three continents and several days, and – in a first for the magazine and for him – via video link, Lindbergh was the only man for the job. “He makes everybody feel their best,” said British Vogue editor-in-chief Edward Enninful.

The Duchess’s instructions to Lindbergh for the shoot – “I want to see freckles!” – were perfectly aligned with his style of photography. “I hate retouching, I hate make-up. I always say, ‘Take the make-up off!’” Lindbergh told fashion features editor Ellie Pithers. “The number of beautiful women who have asked me to lengthen their legs or move their eyes further apart… You would not believe. It’s a culture of madness.”

The Sussexes echoed this in the family’s social tribute to the creative: “His work is revered globally for capturing the essence of a subject and promoting healthy ideals of beauty, eschewing Photoshopping, and preferring natural beauty with minimal make-up.” 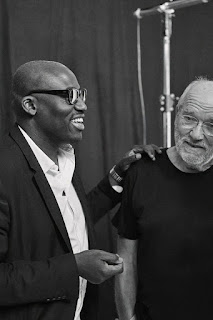 “Sometimes I worry I am becoming an old shmuck, but it was wonderful to photograph this project,” Lindbergh noted on his latest collaboration with the title, which was delayed on account of the photographer’s relaxed approach to digital correspondence. “I got an email [from Edward],” he recalled. “I didn’t see it for two months, because I never check my inbox. Finally, I got a call from an unknown number, and it was him. I was so thrilled.”

“Peter Lindbergh was both a visionary photographer and a dear friend,” said Enninful upon hearing the news of his passing. “His ability to see real beauty in people, and the world, was ceaseless, and will live on through the images he created. He will be missed by everyone who knew him, worked with him or loved one of his pictures.”

The September issue was Lindbergh’s first cover for the magazine since the September 1992 issue, but it is his now-iconic January 1990 cover, featuring supermodels Cindy Crawford, Naomi Campbell, Linda Evangelista, Tatjana Patitz and Christy Turlington, that is perhaps his most famous.

From his work for the international Vogues to the emotive Pirelli calendars and Calvin Klein campaigns that made him a household name, Lindbergh’s elegant and cinematic mode of shooting will, as his estate said, leave a void in fashion.

Posted by FASHIONmode News at 6:00 PM