Moda Operandi Gets A Makeover — By Data And Design

Moda Operandi customers will discover a new look and feel for the site this week as the luxury e-tailer unveils an extensive rebranding. The makeover also signals an aggressive new phase of growth for the company, which is investing deeply in data and technology to place it in more direct competition with Net-a-Porter, MatchesFashion.com and other leading luxury e-tailers.

This comes from an organisation that these days is looking less like a fashion retailer and more like a supernaturally well-dressed tech company. Co-founded by former American Vogue editor Lauren Santo Domingo in 2010, Moda Operandi has been on a hiring bent for the past year, raiding companies from Tesla to Grubhub. The head of data analytics is a Netflix alum. There are several former employees of Amazon, a vice president of strategy who worked at Jet.com and Walmart, and a head of paid acquisition from Facebook. The New York-based company has recently opened a new tech hub in Chicago because executives kept discovering tech talent there.

When it launched almost a decade ago, Moda Operandi was a scrappy start-up offering women a chance to place early orders for runway collections, giving them access to fashion-forward looks that might never have been produced. Now, flush with a Series F funding round that is fueling an expansion into China — its first Asian showroom is due to open in Hong Kong in November — Moda Operandi is pressing into the fast-growing menswear and home goods categories as well.

“Moda was a niche player,” says chief executive Ganesh Srivats, noting that it was a bold business model built around getting shoppers to place deposits on expensive clothing and then wait months for delivery.

Those familiar with the site might first notice the new logo. Rather than a block print, it now has two separate typefaces that represent the yin and yang of fashion — “Moda” spelt in sans serif block letters, and “Operandi” with serifs. The idea is that serifs represent an old-school concept of luxury that Moda Operandi both embraces and rejects. (Burberry, Celine and other fashion brands in recent years have dropped serifs in their logos.) The idea isn’t so much that people will notice the two typefaces, but that they will sense them.

The rebranding is awash in colour, chosen to counter the sea of black and white found on sites including Net-a-Porter, Ssense, Farfetch and MatchesFashion.com. Pale pink has moved over to the men’s packaging, while the colours are pointedly less feminine on the women’s side: an orange is jarringly paired with a lavender and deep dark green. 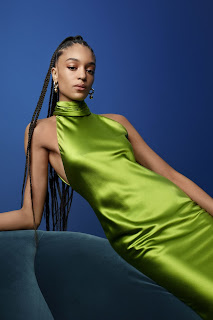 The makeover has been in the works more or less since Srivats joined as CEO last year after leaving Tesla, where he worked as head of sales in North America. Srivats commissioned a study of more than 3,000 Moda customers. It turned out that nearly 100 per cent looked at Moda Operandi as a place to discover fashion — they were using it much like a fashion magazine. Some never placed orders, coming again and again just to browse and learn. (Thirty-eight per cent visit the site daily, and 87 per cent visit at least weekly.) It was clear that Moda Operandi had become a fashion authority. What Srivats thought was missing was data. “We want to be data-driven,” he says.

In order to entice some of those people to start shopping, Moda recently did a trunk show that focused on items available on the site for $500 (£400) or less. The idea was to dispel a notion that shopping at Moda is unattainable to any but the über wealthy.

Moda also learned that its customers thought the site needed to evolve. “They wanted a bit of an update,” says Patrick Emanuel, Moda Operandi’s vice president of brand strategy and the lead on the new design. “They didn’t feel it was as dynamic as the fashion content.”

That doesn’t mean Moda is just stocking up on tech bros. More than half of its fast-expanding engineering team is female, Srivats says. “Diversity is a value that you incorporate in every aspect of business.” Moda’s workforce in the past year has grown to 405 employees from 280. As a sign of the growth the executive team is pursuing, the company currently has more than 100 technology roles open. This comes on the heels of more than 50 per cent year-over-year growth in new customers, with a similar increase in new orders.

With the rebranding work now largely completed, the Moda team has been winding down its daily design meetings, which often took place around the corner from the office at a local wine bar, Local & Vine, on Hudson Street. Says Emanuel: “There were a lot of emergency cocktail hours scheduled to make sure we felt really good about something.”