The lecturer and diversity advocate is determined to make her September 2019 cover a watershed moment in the history of glossy magazines when it comes to representation and visibility.

Since I was a teenager, I’ve kept a list of ambitions and objectives that only in my wildest dreams could I hope to achieve. At the very top of the list was being on the cover of Vogue magazine. I was even specific about the issue - September. My ambition has never been to scale.

I first met Edward Enninful at Christopher Bailey’s final show for Burberry in February 2018. Cara Delevingne jaunted down the runway in the most spectacular rainbow-coloured, faux-fur cape and, as the show drew to a close, I tugged on the sleeve of Edward’s jacket. He turned, wearing a bemused expression. I introduced myself at an incomprehensibly accelerated rate. Yet he was kind, and invited me to Vogue House to speak with him about my advocacy in the domains of design and disability.

"We need to constantly be asking what voices are not in the world, which perspectives are not being considered, and make sure that change occurs with as much intersectionality as possible." 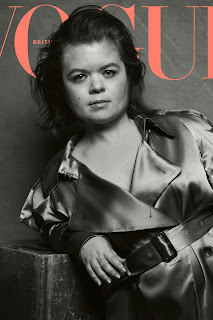 That conversation led to me being featured in The Vogue 25 that year, the magazine’s list of the most influential women in the UK and Ireland, and later to becoming a Contributing Editor at British Vogue. Later that year came a surprise meeting with HRH The Duchess of Sussex during her royal visit to Ireland, and suddenly… wow. I’m now the first little person to ever be on the cover of any Vogue magazine.

Since the Forces for Change cover was unveiled, the response I have received has been overwhelmingly supportive, uplifting, and really quite emotional. Parents of little people have sent me photographs of their babies holding the magazine tightly to their chests. Teenagers who look like me have got in touch to ask questions about how they can work in fashion, and disabled people from every corner of the world have appeared in my Instagram DMs, articulating the power of representation and their hopes that greater visibility will extend to all intersections and disabilities.

The realisation of this dream has required a huge amount of hard work, support from family and friends, and an enormous amount of belief and confidence in myself and those I admire that the world and society can and will change. There is a privilege, and also a responsibility, that comes with being the first to achieve or accomplish any goal. My hope is that fashion magazines become a haven and an incubator for conversations narrated by and about disabled people. And that, although it has taken until 2019 for such a first to occur, minority voices and bodies will soon populate the covers and pages of glossy magazines the world over.

The September issue of British Vogue co-edited by HRH The Duchess of Sussex is available for digital download now on the App Store and for Android, and on newsstands.