On Doctor's Orders, Virgil Abloh Is "Taking A Few Months Off" And Will Not Attend His Off-White Show In Paris

Virgil Abloh, the famously busy founder of Off-White and men’s artistic director of Louis Vuitton, a guy who flies internationally eight times a week, is officially slowing down. “I’m shifting gears,” he told Vogue over the phone from Chicago.

In August, he explained, he was having a harder time than usual “bouncing back” from an overseas trip. “I was just tired, so I went to the doctor. Ultimately,” he continued, “everything is fine, but the doctor told me ‘this pace that you’ve sort of pushed your body – to fly all these miles, do all these different projects – is not good for your health.’”

Abloh declined to go into specifics about his health issue, but did say that his doctors have advised him not to travel. “Essentially I’m working from home for the next three months, and in large part all my marketing events I’m cancelling.” That includes public appearances with Ikea and Nike and participation in Vogue’s third annual Forces of Fashion summit, as well as the November opening of his exhibition Figures of Speech at the High Museum in Atlanta. 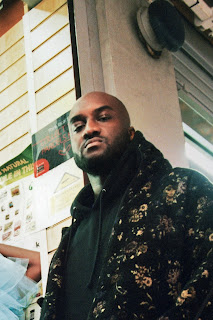 What are the implications for his Off-White brand and his work for Louis Vuitton? Perhaps not all that much. “My Off-White team is equipped to handle this, and my Louis Vuitton team is expert-level. The shows will go on,” says Abloh. Regarding Off-White, which is scheduled for 26 September in Paris, he said: “I designed it with this seeming hurdle in tow. There’s an element that replaces my attendance with crowd participation.” Back home in Chicago, Abloh will be playing “drop boss”.

“I’m excited to drop the kids off at school and be able to be here for those moments,” he said. If Abloh sounds remarkably upbeat about this setback, he’s also feeling reflective. “In high school I always took pride in the award where you didn’t have any sick days. ‘Hey, seventh year in a row I’ve never been home sick!’” But now, at 38? “Being busy isn’t working,” he said. “But I’m using this as I do everything else, as a way to propel me forward.”
Posted by FASHIONmode News at 6:47 PM