Up until now Margot Robbie’s promo tour wardrobe for Once Upon A Time In Hollywood has been led by three things: chiffon cream dresses, colour-block eyeshadow and blown-out Hollywood waves. But for the UK premiere of Quentin Tarantino’s ninth film, the actor switched things up in Oscar de la Renta in a glorious shade of sunset orange. 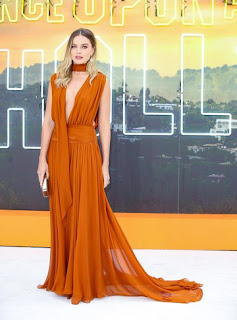 Steered by stylist Kate Young, hair stylist Bryce Scarlett and make-up artist Pati Dubroff, the actor has also been championing Chanel and Derek Lam on the promo trail. For the post-screening after-party, she made another change – but stuck to the Sixties vibe. Robbie teamed a printed pyjama suit in autumnal shades with a pair of metallic, Loeffler Randall knot detail heels.

The film, which hits cinemas across the UK on August 15, centres around the lives of a fading Western star (played by Leonardo DiCaprio) and his jaded stunt double (Brad Pitt) during the summer of 1969 - when the Manson family’s reign of terror stunned Hollywood, and claimed the lives of five people. Among their number? The pregnant actress and model Sharon Tate (played by Robbie), then the wife of Roman Polanski. Rounding out the cast are Dakota Fanning, Damian Lewis, the late Luke Perry, Lena Dunham and Bruce Dern, who plays the owner of the Manson family's infamous ranch.

Posted by FASHIONmode News at 4:46 PM