The average fashion show’s vital stats don’t exactly read green. Duration: 15 minutes. Number of international guests flown in: at least 100. Number of energy-inefficient PAR lights: at least 1000. Seating? Often made to order and discarded post-show. Libations? Usually plastic bottles of water and thousands of uneaten canapés. That’s before we’ve even got to the distinctly seasonal selection of clothes.

As New York Fashion Week gets underway, it’s fair to say that fashion is having an existential crisis. In finally wising up to sustainability, it is slowly realising that its traditional platform – the catwalk – is as outmoded as its obsession with newness. And yet attempts to break the system have stuttered.

Gabriela Hearst, ever the optimist, is determined to effect change from within. This week, the Uruguayan-born, New York-based designer unveils her spring/summer 2020 collection – with a carbon-neutral caveat. Working with Bureau Betak and EcoAct, she has sought to examine every element of the show’s production, design and installation, from catering to transport to power and waste, in an effort to offset her carbon footprint. She has also made a donation of behalf of every guest to Our Children’s Trust, the non-profit organisation that is suing the United States government for its role in causing the climate crisis.

“The shows are a really important point for us because it’s when we create content, when we create our lookbooks, and we get a lot of attention. So when we get this attention, we have to maximise the moment,” Hearst tells Vogue, over Cobb salad at Claridge’s during a recent visit to London (the designer is poised to open a store on nearby Brook Street this month - read an exclusive interview with Hearst and the store's architect Norman Foster in the October issue of British Vogue). “It’s not about talking, it’s about doing. I use the example of when my doctor told me I had high cholesterol. They said if I exercised, I would lower it. I exercised, and it went from 280 to 206. With the show, I wanted to measure our carbon footprint – because we don’t know it – and then offset it.” 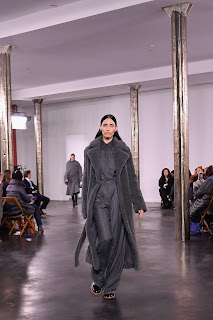 EcoAct has advised that the eventual offset funds should be donated to the Hifadhi-Livelihoods Project in the Embu and Tharaka Nithi counties of Kenya. “The project is about changing the gas stoves that families are using in their village and converting them to cookstoves, a more eco-friendly option,” Hearst explains. EcoAct estimates that cookstoves reduce wood usage by 60 per cent, which means that the time spent gathering wood is reduced from 12 hours to 5 hours, largely impacting women and children. The switch will also reduce emissions of noxious gases.

Hearst is on a mission to reduce waste throughout her business. This year, she converted all her packaging to biodegradable and compostable alternatives; she is in the process of switching from air freight to shipping by boat; and is reducing to zero the use of non-virgin materials in her collections. “Before I go into any season, I see what we have in stock that we can reuse without buying more fabric,” Hearst says. “Then, we make sure there’s no polyester in our velvets or silks, that we don’t use viscose unless it’s certified, that we try to use linen because it uses so much less water than cotton and it’s also nutritional because you can eat the flax seed…you should be creative enough to be able to work around limitations and create beautiful things.”

Ultimately, she’d like to build a coalition of designers to encourage the sharing of environmentally-focussed solutions across the industry. “We should share data, share information about the changes we are making,” she insists. “I ultimately think… that we’re going to be able to control climate change from the pure fact that it’s bad for business. And if it’s bad for business…” She smiles wryly. “There are ways to make a difference but we have to realise that the future of our planet is very important.”
Posted by FASHIONmode News at 6:50 PM