What Does Farfetch’s Acquisition Of New Guards Mean For Off-White?

Farfetch has bought New Guards, the licensee of Virgil Abloh’s Off-White, in a deal valued at $675 million (£558 million) The move is part of the e-tailer’s progressive strategy to become a modern marketplace that leans fully on technology and data, and it’s hoping that its new acquisition will launch “brands of the future”. But in the hours after trading, Farfetch share prices dropped 40 per cent – a new low for the London-based company. Were investors spooked by a side step into the zeitgeist-driven world of streetwear? Or were they also taking into account second quarter results, which once again shows that despite stratospheric growth, Farfetch is yet to make a profit?

“I will not comment on stock prices,” José Neves, chief executive officer and co-chair of Farfetch, told WWD. “I never do. Our job is to remain focused on executing a very exciting strategy and opportunity.” The purchase of New Guards follows Farfetch’s recent launch on China’s JD.com’s platform through its acquisition of Top Life and its 2015 procurement of Browns.

Details of which brands on the New Guards roster – which includes Palm Angels, Heron Preston and Peggy Gou’s Kirin – Farfetch holds a majority stake in have not been disclosed. Abloh released a statement on what the deal means for Off-White’s future: “Off-White LLC, which is controlled by Virgil Abloh, owns the trademark of our brand, and NGG is our exclusive licensee pursuant to a multiyear agreement,” the creative director clarified of the new ownership structure. “The New Guards Group transaction with Farfetch will not affect Off-White’s day-to-day operations as the New Guards Group team will become part of Farfetch. We look forward to our ongoing work together.” 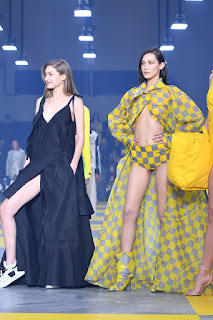 Farfetch believes it can bolster the New Guards Group’s portfolio through its “connected wholesale” model, whereby it can access near-real-time supply and demand data to enable a quicker production cycle that minimises over or under stocking. In addition to giving each brand a prominent presence on Farfetch Marketplace, it will control their individual e-commerce site and digital platforms through its Farfetch platform solutions capabilities.

Davide de Giglio, co-founder and CEO of New Guards Group, said: “We started New Guards Group because we had a vision to build a platform that could support the best creative talent in the world and build iconic brands. Creative visionaries need to be empowered with best-in-class design studios, industrial capabilities and global distribution channels. Farfetch has the technology, expertise and vision to take our business to the next level and unleash the talent of the future.”
Posted by FASHIONmode News at 4:59 PM