Thebe Magugu, the South African designer based in Johannesburg, has won this year’s LVMH Prize. The award comes with a prize of €300,000 (£217,000) and a year’s worth of mentoring from the LVMH group. Alicia Vikander, one of the faces of Louis Vuitton, presented Magugu with the honour. “The talent in this room is quite simply stupefying, and the finalists represent the future of fashion,” said the actor.

The Jury Prize, which has been renamed the Prix Karl Lagerfeld – the late designer once sat on the jury with the likes of Maria Grazia Chiuri, Marc Jacobs, Nicolas Ghesquière, Humberto Leon, Carol Lim, Jonathan Anderson, and Clare Waight Keller – went to Hed Mayner, an Israeli designer who presents his gender-neutral fashion in Paris. 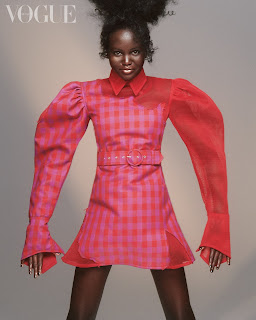 Delphine Arnault, the founder of the Prize, paid tribute to Lagerfeld’s contributions, saying: “This event owes much to Karl Lagerfeld, a creative genius with immense intelligence who was present since the Prize creation in 2013.”

This year’s finalists for the LVMH Prize were narrowed down from a record number of applicants: more than 1,700 from 100 countries. A capsule collection comprising 50 pieces designed by the eight finalists is available to purchase on the luxury retail website 24 Sèvres. Eric Goguey, CEO of 24 Sèvres, told Vogue: “Facing current economic and environmental issues, this new generation of designers shares a unique vision of 'committed fashion'. They are constantly thinking of new ways to create, whilst questioning the status quo. Whether it's upcycling, or working with sustainable fabrics or processes, for example, this crop of talent is truly creating the future of fashion today.”

Posted by FASHIONmode News at 6:03 PM