Christian Dior: Designer of Dreams has officially become the V&A’s most-visited exhibition, after the institution extended its run for seven additional weeks. Upon packing away some 200 rare couture garments and 500 objects, spanning accessories, beauty, media, and Christian Dior’s personal possessions, 594,994 visitors had taken in the show. The colossal retrospective – which traced the history and impact of the couturier, and the six artistic directors who have succeeded him – surpassed the former record set by Alexander McQueen: Savage Beauty in 2015 by over 100,000 visitors.

Led by fashion and textiles curator Oriole Cullen and set designer Nathalie Crinière, the V&A team reimagined the major exhibition Christian Dior: Couturier du Rêve, organised by the Musée des Arts Décoratifs, Paris, for the south-west London gallery space. Within the 11 sections – which began with “The New Look” (a focus on Dior’s famed Bar suit) and “The Dior Line” (the founder’s 10 defining looks from his 1947 and 1957 tenure) – sat a new installation exploring the designer’s fascination with Britain.

“It’s a story that hasn’t really been told before,” Cullen told Vogue of her extensive research into what the 21-year-old man from Normandy connected with upon his first visit to the country to perfect his English. “It was a very formative moment, and something he really associates with freedom and falling in love. From the grandeur of the great houses and gardens and British-designed ocean liners to the food he ate, which, most found less than appealing in the ’50s, the culture became an endless pool of inspiration for him,” said Cullen, before adding, “And he loved British women – the way they wore their tweeds as well as their ballgowns.” 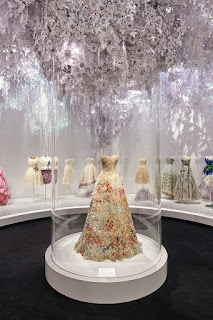 The transformation of the Sainsbury Gallery into the Dior world was quick in relation to the V&A’s usual time frame, revealed Cullen. But the storied museum laid the foundations of Christian Dior: Designer of Dreams long ago. “We worked closely with the house and Soizic Pfaff, the wonderful archivist there, since the ’60s, so they were happy for the Paris exhibition to come to us,” Cullen explained. “The V&A audience has a real hunger for fashion, so we thought it would be great to show the amazing spectacle through our own lens.”

Tristram Hunt, director of the V&A, thanked visitors for going to such great lengths to experience the show – tickets for the entire run sold out in three weeks after opening on 2 February. “The V&A has a history of staging revelatory fashion exhibitions, so we knew that Christian Dior: Designer of Dreams would be popular, but we have been overwhelmed by the phenomenal visitor response.”

Now, the Knightsbridge team’s attention will shift to the installation of Tim Walker: Wonderful Things – the third solo show of British fashion photographer and long-time Vogue collaborator – which opens on 21st September.
Posted by FASHIONmode News at 5:47 PM