If Phoebe Philo’s Céline London flagship was as elegant and desirable as her brand vision, Hedi Slimane’s accentless aesthetic is a testament to his fanatical obsession with Brutalist minimalism. The site: 103 Mount Street. The launch date: now.

Celine fans were first given a taste of Slimane’s hyper-polished store concept in April when he opened the brand’s menswear store on Old Bond Street. The high-shine marble, buffed steel and pristine mirror installations have all been replicated in the mammoth Mayfair space that is part retail floor, part contemporary gallery. Housed among the glossy display units and wooden furniture created by the designer himself are four works from the Celine Art Project: David Jablonowski’s “Futures Contract, Hardcopy 2 2019”; Fay Ray’s “Black Moon”; Lukas Geronimas’s “Column 2019”; and Tiril Hasselknippe’s “Balcony (ribbevegg)”.

The most striking is Geronimas’s totemic structure that looks out at shoppers from within the floor-to-ceiling front windows. The commission was originally for Slimane’s personal collection, after he visited the Canadian artist’s studio in Mid-City LA. Captivated by Geronimas’s world – his inspirations include the writings of Gene Wolfe, the music of Rafael Anton Irisarri, and the choreography of Kazuo Ohno – Slimane shot his portrait for his journal, and began musing over Geronimas’s principal proposition: “the dynamics of content and support”. “Wood and metal are materials Hedi feels strongly about,” Geronimas tells Vogue. “I decided on presenting a stacked column of two repeated forms – a square and a round – with metal dividing each action I took to manipulate the wood.” 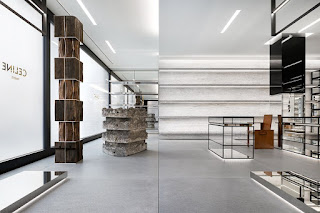 The towering 500lb structure is crafted from three pine beams that Geronimas found at a small salvage demolition yard in El Sereno, one massive fir timber sourced from a timberworks in Temecula, aluminum, and a steel pole built by his friend and fellow artist Jeremy Jansen. “If I had to get the work to London on my own, I could,” Geronimas contemplates. “Of course that was not the case. There were craters, shippers, and installers”. The seven forms were slipped onto the metal base and anchored to the floor after painstaking hours of finessing and FaceTiming Celine’s head office.

On the synergy between his work and Slimane’s aesthetic, Geronimas reflects, “Celine is a house that doesn’t really deal in compromise. It is well balanced as a result of engaging in extremes – it is very warm and it is very cold. The Mount Street store in particular is an unrelenting and very precise presentation of materials, of materiality, and I love it for that.”

While Geronimas personally hopes that viewers of his work will be “enchanted by the two varieties of wood that have been given an exquisite new environment in which to be present”, the brand will no doubt hope that the gallery spirit will entice customers to pause and spend time there. The interiors might feel angular and abstract, but Mount Street is just a bigger snapshot into Slimane’s precise mind. And while he’s still making his mark on Celine, everyone is watching.

Posted by FASHIONmode News at 5:50 PM