Another Once Upon A Time In Hollywood screening, another major red carpet moment from Margot Robbie. The actor, who has been serving up lessons in effortless summer style since the start of the film's exhaustive promo trail, switched from storied houses like Chanel and Oscar de la Renta to every Insta It Girl's favourite label for the Berlin premiere. Robbie, who plays Sharon Tate in Quentin Tarantino's ninth film, wore Jacquemus’s olive green “La Robe Manosque” tiered maxi dress.

Joined by fellow castmates, Brad Pitt and Leonardo DiCaprio, Robbie paired her outfit with Agmes silver jewellery and Tabitha Simmons heels. Earlier in the day, the Australian actor – steered by by stylist Kate Young – opted for the ideal summer dress by Rosie Assoulin Resort 2020 in a marigold hue. Worn with Totême shoes and without accessories, it made for a laidback look. 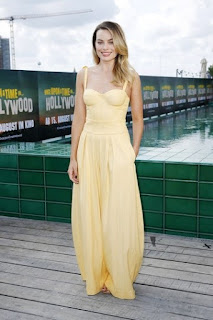 The film, which hits cinemas across the UK on August 15, centres around the lives of a fading Western star (played by Leonardo DiCaprio) and his jaded stunt double (Brad Pitt) during the summer of 1969 - when the Manson family’s reign of terror stunned Hollywood, and claimed the lives of five people. Among their number? The pregnant actress and model Sharon Tate (Robbie), then the wife of Roman Polanski. Rounding out the cast are Dakota Fanning, Damian Lewis, the late Luke Perry, Lena Dunham and Bruce Dern, who plays the owner of the Manson family's infamous ranch.

Posted by FASHIONmode News at 4:54 PM