Kaia Gerber celebrates her 18th birthday today. As her peers are preparing to start university, following formative years spent sneaking into pubs and hurrying through homework, Gerber is entering young adulthood with the fashion world at her feet, after seasons spent captivating designers from New York to Paris with her fragile beauty and astonishingly assured strut.

As the only daughter of Cindy Crawford, it's a world she was born into. But while the teenager attributes her impressive drive to the example set by her "inspiring" parents (her father is the nightlife magnate Rande Gerber, who turned the tequila brand he co-founded with George Clooney into a billion-dollar business), she has little time for suggestions that her own success is the result of any leg-up from her famous family. Neither, it seems, does her mother. "Even though it probably bothers her, we all realise that, yeah, Steven Meisel will see her [because of who she is]," Crawford says. "But you and I both know that Meisel, or Chanel, or Vogue – well, they might have her for an audition, but they're not booking her because she's my daughter... I mean, she's doing things I never did."

The dizzy heights Gerber has already reached range from designing her own capsule collection with the late Karl Lagerfeld to walking in Pierpaolo Piccioli's landmark Valentino couture spring/summer 2019 show, a spectacle that reduced more than one stony-faced fashion editor to tears. And far from being nervous in the presence of industry legends, the teenager – who recalls Naomi Campbell staging spiritual rituals at the family home in Malibu on New Year's Eves – insists she found it "more intimidating to walk into school and be around people my own age" than to be on set with Meisel at 13. She doesn't suffer with pre-shoot jitters to this day. "I mean, I'm just standing there - how bad can I do?" she says. 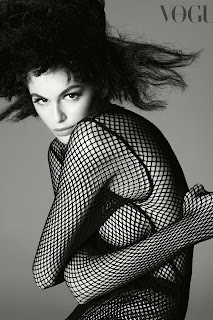 Between the catwalks and the cameras, there isn't much room for romance, it seems. "When I'm working, I don't have the energy to even flirt with anyone. I'm sorry, I just can't," she laughs. "But I'm not losing hope in all love forever." Plus: "I have backgammon at my house, and that’s all a girl needs. When I’m home, I’m living the life of a 70 year old woman."

Gerber, though she could easily appear an all-American princess, seems resolute in maintaining a somewhat geeky persona – a quality that's all part of her charm. It's also a philosophy she's keen to recommend to the hordes of girls who look up to her. Her one piece of advice? "It’s just being yourself: not being afraid to read a book or talk about things that might be considered nerdy." She might have just turned 18, but this supermodel – as she says herself – is an old soul.

Posted by FASHIONmode News at 5:40 PM